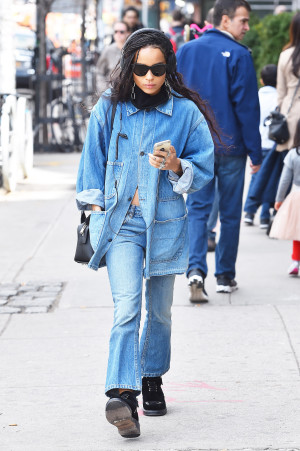 The streets of New York require a rugged uniform that can withstand any adventure, any mercurial temperature change, and, certainly, any trend. Historically, the look of the Manhattan urbanite has been all black, but as Zoë Kravitz—one of the city’s most fashionable denizens—proved yesterday, that dress code may be giving way to all denim. With her waist-length box braids flapping in the wind and her Alexander Wang Rogue satchel swinging from her shoulder, Kravitz looked like a true New Yorker as she strolled about the city.

The Allegiant actress had made an appearance on The Tonight Show Starring Jimmy Fallon wearing Wang’s cropped flared jeans earlier in the week, and chose to layer them with an oversize denim workwear jacket and black lace-up creepers for her casual jaunt. Wang’s coveted chain-link earrings dusted her shoulders, adding a jolt of punk to the ensemble—and a whole lotta attitude to the idea of the traditional Canadian Tuxedo.