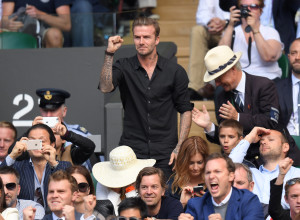 The final week at Wimbledon has always attracted a bevy of celebrity tennis fans to the stands, and this year is no exception: Centre Court regulars like Bradley Cooper and David Beckham were seen rooting for Roger Federer during his remarkable win against Marin Cilic during the men’s quarterfinals. Meanwhile, the Duchess of Cambridge and Ellie Goulding showed their support for Serena Williams as she defeated Elena Vesnina and advanced to the finals. (Williams and the Duchess later posed together on the tennis star’s Snapchat.) Above, a look at all the celebrities who have taken in a match or two at this year’s Wimbledon tournament.