Supporters of Donald Trump claimed the interview was a “trap” and he “wasn’t ready” for questions on abortion. But the real reason Trump took a stand that even antiabortion groups don’t support is because he’s been fooled by some Republicans who imply that an overwhelming majority of Americans want to overturn Roe v. Wade.

You could tell it was bad for Trump when his own campaign immediately tried to walk back their candidate’s comments on abortion, when he vowed to criminalize all abortions and punish the woman for seeking one…and Trump never takes back a comment, right? Even antiabortion groups denounced the latter policy idea of Trump’s that he provided in an MSBNC interview.

Dr. Ben Carson tried to defend Trump, claiming “I don’t believe that he was warned that that question was coming, and I don’t [think] he really had a chance to really think about it,” the former rival, now a Trump convert, explained to CNN.

Thanks to the politicization of the topic, is it really that much of a stretch that a candidate today would be asked about views on abortion? It’s not like he was asked about Romania’s stand on nuclear non-proliferation. All candidates today get asked about this issue. It’s also hardly the beginning of the campaign. Playing the “green horn” excuse at this stage doesn’t work. 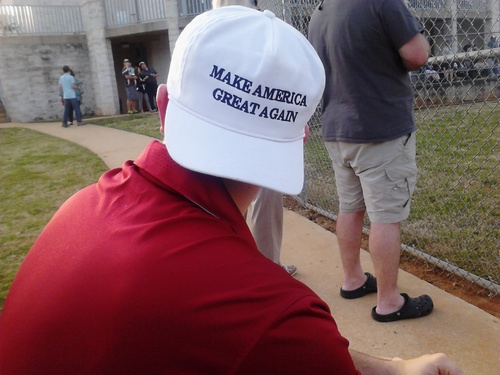 Another Trump and TEA Party supporter claimed the question was a “trap.” Read the transcript of the interview and see if there’s an unfair question. And when Trump has taken so many positions on the issue over decades (from calling himself “very pro-choice” to today’s view), it is not surprising that someone in the media would want to know what the GOP front-runner really thinks. It’s commonplace for a campaign whose candidate (like Sarah Palin) blows an interview to claim that the questions were “a trap,” instead of having straightforward questions like whether women should be punished for abortion, or what’s the latest book you’ve read.

Though Trump supporters are thinking of any excuse for his behavior, it’s likely that Trump simply took a stand he really thought was reasonably popular, and it blew up in his face, because those he’s listening to have been playing fast and loose with the polls about support for abortion.

Take, for example, Tennessee Rep. Diane Black’s Fox News column, where she touts her support for opposing late-term abortion, which she claims has 80 percent support. That is backed by Gallup polls. But the rest of the column uses language to imply that support for getting rid of Roe v. Wade is pretty popular, and it isn’t.

Reading those Gallup polls Black cites will reveal that not only is support for overturning Roe v. Wade only 29 percent, but even that number is down from it’s high of 36 percent in 2002. A majority of Americans support keeping Roe v. Wade. In fact, when one looks at a collection of polls (and not just Gallup), support for Roe v. Wade increases. And those who think it should be illegal in all cases only make up 18 percent of the population.

It’s true that only a few years ago a majority (50%) of Americans described themselves as “pro-life” (it’s back down to 44%, overtaken by 48% of Americans claiming to be pro-choice) in those same Gallup polls. But that doesn’t mean Americans are inconsistent on the issue. It’s possible to be personally pro-life, but not want one’s opinion to be forced upon another. And that’s where Trump misfired. He thought he had a winning issue, but was deceived by those who inflated polls on abortion views, just like those who were led to believe Planned Parenthood videos weren’t doctored.

John A. Tures is a professor of political science at LaGrange College in LaGrange, Ga. He can be reached at jtures@lagrange.edu.