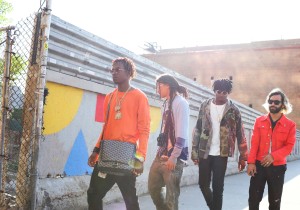 Just like rapper Rich The Kid’s hit song boasts, we gotta “keep it 100” when discussing the style of the rising hip-hop star: It’s simply undeniable. Hitting New York Fashion Week: Men’s with his ubiquitous Goyard “murse” and well-coordinated squad, the 24-year-old Atlanta rapper showed all signs of being a new force in music and fashion. There he was sliding into his front row seats at Rochambeau and N.Hoolywood, deftly matching his vibrantly hued dreadlocks to his blinding orange pullover. A few days later, Rich—né Dimitri Roger—sauntered in among the natty show attendees in a perplexing but no less cool pair of baggy skinny jeans. Looping them with a monogrammed Goyard belt, like the de facto poster boy for the storied French accessories line, he brought new cool to the 163-year-old brand. Tiers of gold chains and man jewelry glittered against his graphic tee; his rose-color sunglasses matched almost perfectly with his orange dreads.

And should you think the rapper is showing out for the Fashion Week, think again. The Rich Forever artist has made significant details practically his signature. When skateboarding with, say, Jaden Smith, only skinny Off-White denim will do. His Kurt Cobain–esque bug-eye sunglasses are a constant, and how can we forget his tongue-in-cheek approach to menswear suiting? Recently styling out an oversize blazer and trousers with a pair of blackout shades, a cigar, stacks of cash, and, yes, that Goyard murse, Rich looked like he was fashion’s new boss.

The post Who Is the Atlanta Rapper Taking Over Men’s Fashion Week? appeared first on Vogue.