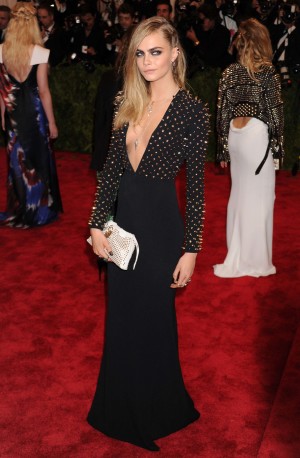 If you need an understated and demure starlet, Cara Delevingne is not the girl for you. Throughout her career as a model and actress, Delevingne has lived her life as boldly as possible, never afraid to look silly, speak her mind, or go against the grain. Before every model was sharing their thoughts on social media, Delevingne put her irrepressible personality on display and became an It girl in the process. Given her fearless outlook and quirky persona, it should come as no surprise that her wardrobe possesses a certain amount of playfulness: Long before she was playing Enchantress onscreen, Delevingne stepped out in the kinds of body-conscious, high-drama pieces befitting a supervillian—or hero, depending on your perspective.

Suicide Squad’s bad-guys-as-the-good-guys plotline doesn’t lack for excitement, but the film’s wealth of international premieres and press events will provide Delevingne’s followers with a chance to see her transform both onscreen and on the red carpet. Given her track record for embracing bold trends, there are certain to be a few memorable ensembles during the press tour, but it’s hard to imagine how she’ll top her previous looks. Already a fan of Balmain jumpsuits, Burberry metal spikes, and the occasional Gucci cape, it’s unlikely that Delevingne would require any wardrobe help were she to foray into crime-fighting on a more permanent basis. Here, we take a look back at 12 times Delevingne mixed supermodel fashion moments with her own inner superhero.

The post Way Before Suicide Squad, Cara Delevingne Was a Superhero on the Red Carpet appeared first on Vogue.