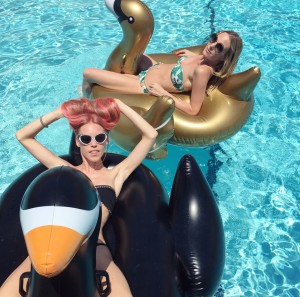 I had only been to Los Angeles once before, and that was just for a 48-hour stint pre-Coachella, but I was totally obsessed. This time I was desperate to really explore the city and see what it had to offer. After an 11-hour flight from London, Poppy Delevingne and I (having not slept a wink due to incessant chatting) landed in the City of Angels. Writing 90210 as my zip code on my ESTA application already made me realize how far I was from home and also how much I had fictionalized this place in my mind. Whilst waiting for my bags, I helped an older lady take two suitcases off the belt. She thanked me kindly from under her beautiful hat and then I realized it was Jane Seymour. Yes, we are in the home of Hollywood.

A short drive through palm trees and Californian sun and Poppy and I were in our happy place: The Beverly Hills Hotel, probably my favorite hotel in the world. The candy stripe pinks, banana leaf wallpaper, and 1950s vibe makes it a truly unique and charming place to be. Attempting to eradicate jet lag, we sat in the sun, munched on truffle fries, and somehow managed to stay up till the early evening.

A new day dawned and I have to admit, I still felt like I was in a dream world. Well, I was definitely not in rural Cambridgeshire. Every pressed juice under the sun was offered my way. Egg-white omelets, gluten- and dairy-free cookies. The sense and understanding of health was apparent in each restaurant, café, and bar that I visited. Okay, maybe not at Sprinkles’ cupcake vending machine, but they did have a gluten-free option at least. And Californians are also much friendlier than us Londoners. There was not one Uber driver that didn’t ask me how I was, how my day was, and when they realized I had family in the U.K., how they were! Not only does the sun shine here, so do the people.

My friend Mary Charteris was my tour guide. A fab English chick, she moved to the city recently with her husband, Big Pink rocker Robbie Furze. I knew she would know the places that would tickle my fancy—places that didn’t even exist in my imagination, and that weren’t on the map either. We rifled through many a vintage store, china shop, and florist and ate asparagus and salami pizza at Gjelina on Venice Beach. Our days flew by and the sun had set before we knew it.

No Los Angeles experience is quite complete without a night out at Chateau Marmont, plus cocktails are a must for jet lag. Its dark interiors give it a naughty feel—a faultless environment for an evening with the gang. Martinis flowed, promises were made, and hangovers were sure to be met in the morning; but we were in L.A. and it was always going to be worth it.

Leaving Los Angeles for LAX left me wanting more. The city’s vibrancy and effervescence were already pulling me back. I suppose it’s because it’s just so different from home. Is that what makes it so special? I’m not entirely sure it’s just that. It just is special. It certainly sparkles and it certainly puts a smile on this Brit’s face.