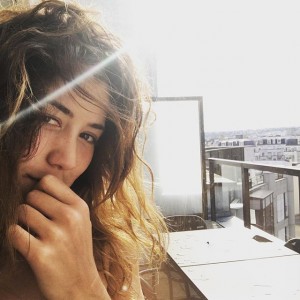 Darting around the red-clay court at Roland Garros today, Garbiñe Muguruza quickly dispatched her second-round French Open opponent with a fluid series of forehands and drop shots—as expected of the tennis world’s rising star. It was the 22-year-old Venezuelan-born Spaniard who famously held her own against Serena Williams in last year’s Wimbledon final, and whose head-turning play style is matched only by the stealth bombshell hair she rocks off the court.

A quick glance through Muguruza’s Instagram feed reveals that, whether strolling the streets in her adopted hometown of Geneva or touring the Basque countryside, her hair falls into beachy waves—a far cry from the power ponytail that’s her on-court signature. “I always play with a very high ponytail, so that my hair doesn’t bother me”—securely double-banded, she adds, her face-farming layers held back by a visor—“but I try to keep it healthy,” Muguruza says. A hydrating conditioner keeps her mane soft (“Even though I’m washing it all the time”), as does a rigorous brushing regimen (“It relaxes me!”). It’s the same no-nonsense tack Muguruza takes with her tennis—and another reason why this up-and-comer is one to watch.