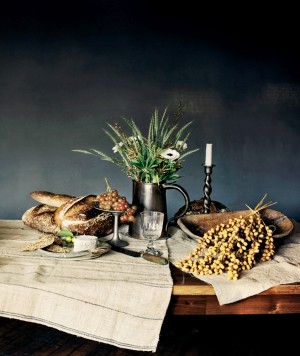 I often feel inundated by talk of all things gluten-free. Menus and supermarkets cater to the high number of people who seem to have developed this—historically rare—condition. But recently, baking bread yourself has been on the rise (pun intended). The healthy grains of Adam Leonti’s Brooklyn Bread Lab—and other such establishments—may be delicious, but for me, when it comes to bread, nothing compares to the wafting scents of a Paris boulangerie. Specifically, a perfect baguette cannot be beat. So in search of the ability to bake said iconic French loaf at home, I set out to Maison Kayser to learn from the very best.

I arrive one Tuesday after work to the Bryant Park location, and am whisked past the pistachio éclair-filled pastry cases to the kitchen, where Eric Kayser has kindly agreed to give me a tutorial. (Eric is very nice and a fellow redhead, so I am immediately optimistic that we will get along.) Our first step is fairly obvious—we mix the five ingredients together in a bowl. Flour, water, salt, yeast, and sourdough starter are all it takes. However, my kneading quickly creates a sticky mess—from which my hands cannot escape. Confession: Eric has to take over for the remainder of this step. The issue seems to be that I was not slamming down the dough hard enough—so don’t shy away from throwing down your lump with gusto, in order to trap in as much air as possible. It’s an arm workout and “very simple,” as Eric says. (At this point, I was skeptical.) Madeleine Luckel and Eric Kayser preparing baguettes to be baked

Next, now that I actually have a smooth, round ball—which is replaced by a premade sample that the kitchen has nicely crafted and allowed to rise in advance—it’s time to make the loaves. We sprinkle more flour, which is surprisingly difficult given that there is a specific technique to this as well (an unforeseen issue). We cut the round mounds into thirds and keep throwing down each piece, folding them over onto themselves somewhat like before. After an hour this gets repeated a third time, but we pinch together the seams of the dough to trap in even more air—almost as if we are sealing empanadas.

Now, our former lumps are starting to look longer. But they are still not what I picture when I think of a baguette. Finally, we roll out each piece with our hands—ideally in one movement—pressing slightly harder at the ends. (Luckily my clay class memories have kicked in, and I think I am starting to redeem myself.) The loaves need to sit once more, on baker’s cloth (or a dishtowel). Team Kayser has again prepared a specimen in advance to whip out as a time-saver. Before we pop our baguettes in the oven, we take razor blades (yes, actual razor blades) to cut four diagonal slits. Practical (I think), in order for the heat to be able escape, but our markings also help create the look I am hoping for. Twenty minutes later of mouthwatering smells emanating from the oven, and the baguettes are ready. Voila! Simple in the end as foretold, but all about the technique. So go ahead and try it at your own maison. It’s very doable, just perhaps most enjoyable with a Netflix series and glass of merlot for all the breaks.

Kneading by Hand:
Put the flour on a work surface or in a mixing bowl and make a large well in the center. Pour in two-thirds of the water and mix until all the flour has been incorporated. Leave to rest for 1 hour under a damp cloth, then incorporate the rest of the water, the starter, fresh yeast, and salt. Knead the dough until it becomes smooth and elastic.

Shape into a ball and cover with a damp cloth. Let rise for 1 hour, 30 minutes. It will have increased in volume by the end of the rising time.

Dust the work surface. Divide the dough into three equal pieces. Fold each piece over on itself, pulling gently to stretch into a longish log. Cover with a damp cloth and leave to rest for 30 minutes.

With lightly floured hands, roll the baguette out to 21 inches long, then pinch each end into a point. Shape the other two baguettes the same way.

Carefully lift the baguettes onto a lightly floured baker’s cloth, seams underneath. Separate them by making folds in the cloth. Cover with a damp cloth and leave to proof for 1 hour, 40 minutes, by which time the baguettes will have increased in volume.

Place a baking sheet on the bottom shelf of the oven and preheat to 450 degrees Fahrenheit. Gently place the baguettes, seam down, on another baking sheet lined with parchment (baking) paper. Dust with flour and make four evenly spaced oblique slashes along the length of each baguette. Just before putting the baguettes in the oven, pour a scant 1/4 cup of water onto the preheated baking sheet. Bake for 20 minutes.

Remove from the oven and leave to cool on a wire rack.

The post The Secrets to Baking the Perfect Baguette at Home appeared first on Vogue.