Last week, European Union leaders announced a new deal with Turkey. It was hotly anticipated for a number of reasons: Would it “solve” Europe’s refugee crisis? To what extent would the EU give in to Turkish President Recep Tayyip Erdogan’s demands? The deal seeks to repatriate refugees back to Turkey, which would become a “safe country.”

How exactly the deal will be implemented remains to be seen, and what it actually means for the right to asylum in the EU will need to be discussed. But the deal has further repercussions that EU leaders either do not want to see or — more probable — cynically factor in as part of doing business. But let’s be clear: this deal is making a mockery of alleged European values, and it further empowers Erdogan, who has become increasingly authoritarian.

The deal calls up memories of Europe’s rather checkered history of deal-making with Turkey. One recalls another German chancellor from another time: In late 1915, it was becoming increasingly clear that the Young Turk leadership was using World War I as cover to get rid of the Armenian question by “doing away” with the Armenians themselves. Germany should have known — its consular services in the Ottoman Empire were vast and meticulous. Its consuls in Eastern Anatolia had chronicled the Armenian genocide from day one. 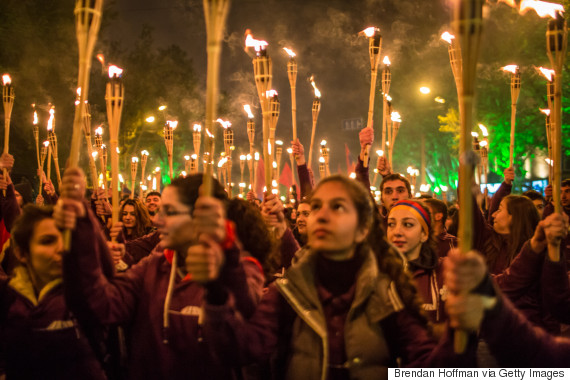 People participate in a torchlight procession through Yerevan, Armenia, on Apr. 24, 2015, to commemorate the anniversary of the Armenian genocide. (Brendan Hoffman/Getty)


German Chancellor Theobald von Bethmann-Hollweg reacted angrily to mounting pressure to intervene with Germany’s ally, the Ottoman Empire, to stop the Armenian genocide. He wrote, “Our only goal is to hold Turkey at our side until the end of the war, regardless of whether the Armenians perish over that or not. If the war carries on for a while, we will need the Turks very much.”

Our “war” today is different, as are the potential victims of today’s cynical realpolitik. And yet, there are unsettling parallels of violence and geography — think of the renewed violence in the Kurdish regions of Turkey as well as U.S. Secretary of State John Kerry’s declaration of the so-called Islamic State committing genocide in the very same regions in which Armenians died a century ago.

Furthermore, that fact that we “will need the Turks very much” — in Europe, the Middle East and the world — is again quite clear. Yet we are mistaken if we think it is Erdogan’s Turkey that we will need; it is the other Turkey, currently being destroyed by Erdogan, that we will sorely miss in the future. 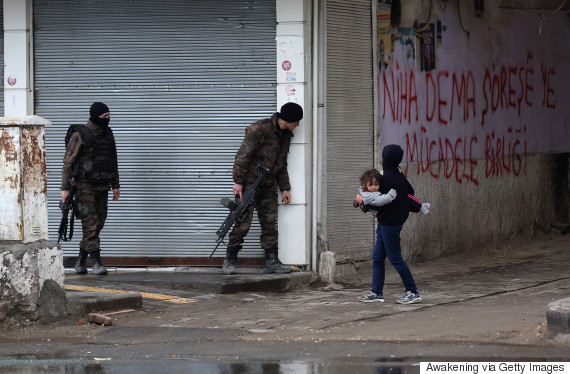 Police forces look for PKK members on Mar. 15 in Diyarbakir, Turkey, after fighting between members of the PKK and the police. (Awakening/Getty)


This is precisely where the parallel applies much more poignantly. Something else that is being cynically left to perish, besides people, is the future of the EU and the future of Turkey. Without much ado, in the quest to solve the refugee crisis, the EU devalued itself in a fundamental fashion — it connected the deal to Turkey’s EU membership negotiations. Erdogan’s Turkey can now hope for faster opening of the next chapters in the accession process. While it must be doubted that Erdogan still wants Turkey to actually become a member, it has a symbolic significance that is almost poisonous.

The prospect of EU membership used to mean something, or was supposed to. It was an instrument to strengthen and enhance the opening of societies, to further cement the rule of law, to protect a plural and open society — and of course, to make a country compatible with a host of economic and other standards. Already in the last waves of enlargement (2004 and 2007), this great tool of reform and democratization was under-used. The EU, for example, incorporated a divided Cyprus, giving up a great incentive for conflict resolution without actually having made much use of it.

Instead of using Turkey’s EU perspective and various partnerships and bi- and multilateral relations to protect freedom of speech in Turkey, the EU has singularly rewarded Erdogan in this great game of refugees. If anyone ever doubted that Erdogan was an astute strategist, here is merely the latest proof. He has been testing both Europe and Turkish society to see how far he can go. And he has been met with less resistance than should have been expected. It has emboldened him — beyond measure, some would say. The dismantling of the other Turkey — of the pluralist, open Turkey with a vibrant civil society — is on Europe’s conscience. 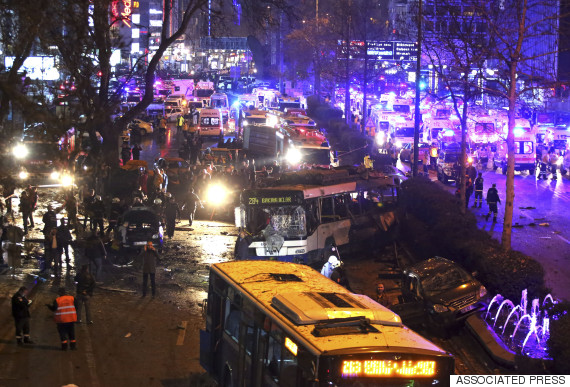 Members of emergency services work at the scene of an explosion on Mar. 13 in Ankara, Turkey. (Riza Ozel/ Hurriyet Daily/ AP)


Declaring Turkey a “safe country” will sound rather cynical to journalists and academics who face harassment and arrest by the government (not to mention ongoing violence in Turkey’s Kurdish regions). And it’s not just Turkish journalists — the German magazine Der Spiegel ran a story in the middle of the Brussels negotiations about how its correspondent in Istanbul had to leave the country when the government didn’t renew his visa. Der Spiegel saw this as a clear sign that its journalist was declared persona non grata because of his critical articles and that his freedom of speech was being violated in Turkey.

With the latest deal, the EU has not only once more made a mockery of its self-declared asylum laws and rights — it has devalued its own core political values. By its sheer timing and its (relative) lack of condemnation of Erdogan’s continued crackdown on the opposition and remodeling of the country along more autocratic lines, it blatantly declared that freedom of speech (especially of the press and academia) and the rule of law do not matter as much as solving problems and staying in power. This deal is very much about German Chancellor Angela Merkel’s approval at home.

It is hard not to agree with political scientist Kerem Oktem that every deal with Erdogan strengthens him further. After the Brussels deal, Erdogan can turn to his population and tell them that all the criticism from abroad of the past months has been negated by the collected EU leadership. He can tell them that Turkey is Europe’s close partner and that EU membership talks will continue at a faster speed. What more democratic credentials could one possibly need?