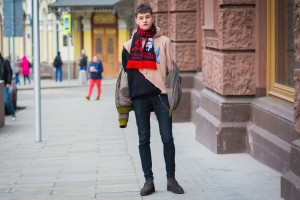 Don’t let the abundance of football scarves starring in street style shots from Russian Fashion Week fool you: There weren’t many FIFA-related allegiances spotted alongside the 100 percent acrylic accessory. Instead, the cheeky piece received the designer touch. And aside from a lone guest who opted for a “New York”­–emblazoned reference, most of the necks of showgoers were wrapped with creations by local designers. A logo-centric red-and-black scarf by the grungy underground label ZDDZ rose to the occasion when paired with a red trench, while two attendees were spotted donning a Cyrillic-stitched black-and-white scarf by the popular Russian streetwear label Sputnik 1985. But it was model Ivan Shalakhov who wore one of the coolest pieces—a black-and-red scarf inscribed with “Grazhdanskaya Oborona,” which translates to “Civil Defense” and is the name of a post-Soviet punk band. The best part about the hammer and sickle–stamped piece? Like any good soccer scarf, Shalakhov snatched it from a street kiosk for less than $10: a stellar bargain for this season’s biggest lens catcher.

The post The Football Scarf Gets a Russian Street Style Makeover appeared first on Vogue.