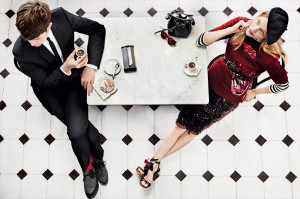 For dedicated detoxers, coffee is one of the first things to go, often exchanged for a supposedly healthier stimulant, tea. So, when the government released a new set of dietary guidelines in January that included coffee for the first time, the eternal question of coffee vs. tea suddenly seemed up for debate once more.

The movement in favor of coffee has been brewing for years, with a growing body of encouraging research and vocal supporters such as Bulletproof Coffee founder Dave Asprey, who claims that coffee with grass-fed butter increases his energy and mental focus. Memorably, a study, which came out last November from the Harvard T.H. Chan School of Public Health, found that drinking a moderate amount of coffee a day—here defined as three to five cups—may lead to a lower risk of premature death from some illnesses.

According to coauthor Ming Ding, those benefits likely boil down to the antioxidants in coffee—specifically chlorogenic acid compounds—and caffeine had no perceived effect, as respondents drank caffeinated and decaffeinated blends. “We think that since coffee has a lot of those antioxidants, they somehow reduce systematic inflammation, and overall coffee consumption lowers mortality,” she says. Though no studies have specifically examined the impact that milk and sugar have on those benefits, Ding and her team advise keeping the amount of sugar and milk as low as possible—and other researchers have agreed that black coffee is where the data seems to pull through.

As for tea: Let’s not forget that Bulletproof Coffee was inspired by a yak-butter tea Asprey drank in the Himalayas, and that green tea, in particular, has long been culturally associated with everything from weight loss to prolonged lifespan. Hasan Mukhtar, a professor at the University of Wisconsin whose laboratory has studied tea since 1989, deems it healthier than coffee, “without a doubt.” “With coffee, the data is not as strong, the studies have not been repeated from as many labs as tea, and the effects are not as robust,” he explains.

Mukhtar’s research has focused on fighting cancer—of the skin, in particular. “We have consistently found that topical applications for the skin and oral administration of tea leads to significant reduction in cancer incidences,” he says. Polyphenolic compounds in tea, like EGCG, have been shown to provide significant protection against radiation and sun damage, results that Mukhtar stresses have been repeatedly shown in “many, many studies.”

Other experts, however, are less sold on tea’s supremacy, like Aaron E. Carroll, a professor at Indiana University’s School of Medicine, who has written that he personally finds the evidence for tea’s health benefits less compelling than that for coffee.

But perhaps it’s Steven Hatch, M.D., author of Snowball in a Blizzard: A Physician’s Notes on Uncertainty in Medicine, who sums it up best. “There’s always some study looking at the effects of, say, coffee consumption on any number of health questions,” he wrote in the book. “Whatever effects routine coffee consumption may have in these situations, they are likely to have a small impact and . . . are probably not worth changing your coffee habits immediately.”

In other words: The jury’s still out on this one—and may be for a while—so in the meantime, drink what you like. Moderation, in all things.

The post The Coffee vs. Tea Debate: Which Is Healthier for You? appeared first on Vogue.