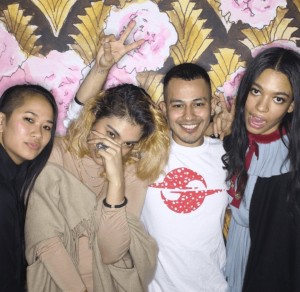 Searching for baguettes in the local market. Tooling around the Marais on a bike. Taking selfies in front of the Place de la Bastille. Sounds like your typical tourist itinerary of an American in Paris, non? But when you consider that these plans belong to America’s next big design exports, you know there are bigger plans on the agenda, too. The 2015 CFDA/Vogue Fashion Fund Award winners—Gypsy Sport’s Rio Uribe, Jonathan Simkhai, and Brother Vellies’s Aurora James—are in town for the Americans in Paris showroom at the Espace Commines this season. In between preparing the studio space for visits, the newest members of the city’s beau monde took in landmark sights, capturing plenty of behind-the-scenes moments along the way. Here, a glimpse inside their Parisian adventure.