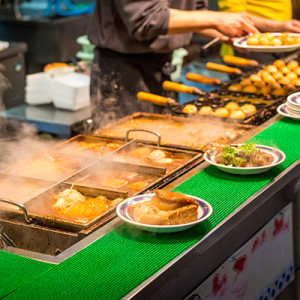 The days of sushi as a strange, exotic food are long gone in America—you can buy California rolls at 7-Eleven (though it’s got nothing on the convenience stores in Japan). And thanks to ramen shops popping up everywhere from Austin, Texas, to Milwaukee, now we know noodle soup in all its glory (not just the instant packs many of us grew up with). Maybe you’ve tried kara-age, Japanese fried chicken, or you spoon some matcha into your smoothie in the morning. But beyond sushi and ramen—green tea, soba, udon, yakitori—there’s a world of delicious Japanese food that’s still far from the mainstream outside Japan.

A ramen crawl of Tokyo (or New York or Hong Kong) is, of course, a worthy pilgrimage, but on the streets of Japan or in your hometown, look for some of these other delicious dishes. Get together with friends for an okonomiyaki party. After a long day on your feet, order a hearty umami-packed donburi. If you’re craving comfort food, try a plate of omurice at a kissaten. Before (or after) a night on the town, gather at a street stall with tired salarymen (businessmen) to sample oden. Can’t get a reservation at Jiro’s sushi restaurant? Try a tasting menu of delicate high-end tempura instead! Here are some awesome Japanese foods that deserve more attention (and this is just the tip of the iceberg).

The post The 5 Best Japanese Foods (That Aren’t Sushi or Ramen) appeared first on Vogue.