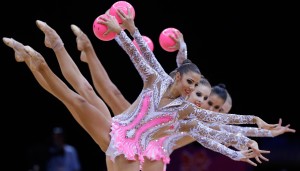 The Olympics are incredible to watch because there’s nothing more dramatic than seeing a person who has sacrificed nearly everything over the course of a lifetime lay it all down on the line for a moment of possible greatness. There’s Michael Phelps destroying medal records, his only remaining competitor seeming to be himself; there’s Katie Ledecky, who seems to exist outside the laws of space and time when she hits the water; there’s Ibtihaj Muhammad breaking fencing barriers with each lunge of her foil, and, of course, Simone Biles, who has just cemented her place as the greatest gymnast of all time. Then there are those incredible sports that, in the last four years, you probably forgot were even a thing.

It’s admittedly pretty wild that a person—even one named Steele Johnson—would spend his life learning how to execute a 2 1/2 backflip with a 900-degree twist in exact unison with another person. Synchronized diving joins a league of unbelievably specific competitive sports, including the steeplechase and the now-defunct solo synchronized swimming, that help make the Olympic Games such a delightfully opulent spectacle. So while we wait for surfing to join the 2020 Summer Olympics and hold tight for the hairsplitting rules of curling in the Winter 2018 games, here are a few more almost-too-wonderfully-weird-to-be-true events to catch in Rio.

Team Rhythmic Gymnastics
Rhythmic gymnastics is already a can’t-believe-your-eyes athletic pursuit worthy of a Ringling Bros. tour, an event wherein borderline contortionists arch their limbs, dance, and perform tumble passes, all while keeping ribbons, balls, hoops, clubs, or ropes turning in the air. But when multiple gymnasts take the floor together for the team events, the sport becomes part gymnastics, part synchronized swimming, part juggling, and entirely out of control. Do yourself a favor and mark your calendar for Saturday, August 20.

Race Walking
In the world of speed on foot, there are Usain Bolt, Carmelita Jeter, and Wang Zhen, who just took home the Olympic title for the fastest man to walk 20 km. Yes, every four years, race walking, colloquially known as speed walking, dusts off its suburban sidewalk connotations and heads to the summer games. Each walker must keep one foot on the ground at all times, or, legally speaking, appear to have at least one foot on the ground, as they vie for a place on the podium, resulting in a signature speedy sashay to the finish line.

Trampolines
Those who live for gymnasts’ robust tumble passes might train their gaze on trampoline, now enjoying its fifth tour of the Summer Olympics, with women competing today and men soaring through qualifying and final rounds tomorrow. Condensing the most riveting airborne feats of floor events into less than a minute of action, the athletes gain jaw-dropping height by bouncing multiple times on the apparatus before setting off on dizzying successions of twists, layouts, flips, and pikes. We’ll have our eye on defending champions Rosie MacLennan of Canada, and Dong Dong of China.

Modern Pentathlon
Bruce (now Caitlyn) Jenner may have emblazoned the decathlon into the modern collective consciousness—a two-day, 10-part amalgamation of track and field events ranging from the high jump to the pole vault, discus throw, and 110-meter hurdles—but how familiar are you with the pentathlon? Though it only encompasses five events, the range of skill required is vast: The winner must know his or her way around a pistol, pool, épée, horse, and track, and prove their prowess at shooting, swimming, fencing, equestrian, and running. Truly no small feat.