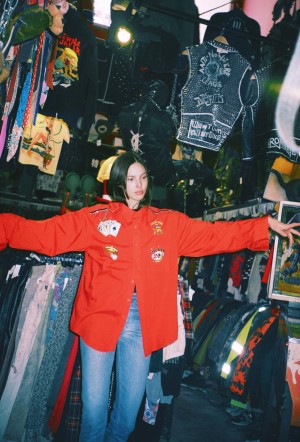 Is St. Marks Place still fun? Depends what your definition of fun is. These days talk of the iconic New York City street once occupied by punks and junkies mostly consists of people scowling about how St. Marks used to be fun, and dangerous, and dirty, and real; dropping iconic downtown names and anecdotes about how a strung-out drunk once barfed on their flea-ridden Dr. Martens circa 1982. Or how all of the best stores, like Boris “the shoe guy,” left for Brooklyn, The Sock Man packed up, and Trash and Vaudeville relocated. But for model Ruby Aldridge and the Vogue.com crew who are exploring and shopping the area today, St. Marks is fun, albeit a sanitized version, less Sid Vicious, with dollar pizza joints and stoned college kids.

But there is one place that retains some of its original allure: Search & Destroy, nirvana for vintage slashed-up, sweat-stained clothing—and, conveniently enough, the location of Vogue.com’s pre–Met Gala party. But to start out, we head to the beloved, newly relocated Trash and Vaudeville on 96 East 7th Street to pay our respects. The new interior is clean and sterile, still lined with lace-up corsets and rock-band tees. As we frolic between the racks of black, BDSM-types of clothes, Aldridge pulls out a pair of pants, noting they resemble a piece from a mall goth costume. “These remind me of the JNCOs that I bought recently!” says Aldridge. “But the JNCOs weren’t as good as I thought.” The real treasure? The bottom floor, which is chock-full of sky-high platforms commonly known as “stripper heels,” some replete with Lucite heels.

By the time we reach Search & Destroy, we’ve passed countless souvenir shanties selling cheesy hats, cheap shirts printed with profanities, and one-hitters; Aldridge has managed to score an orange pageboy wig reminiscent of Milla Jovovich’s character’s crop in The Fifth Element. (Luckily, haggling is a tradition here: Aldridge talks the vendor down five dollars.) The inside of the store is a filth-coated dungeon with a deafening soundtrack of ’70s screamo music and lasciviously decorated with the severed body parts of dolls, glass jars of shrunken heads, and dildos. Search & Destroy traffics in shock value—among the other design elements, the pages of a pornographic magazine are meticulously tacked open on a stand near the entrance—but the gloriously rotten oasis is also a shopping paradise full of spray-painted leather jackets that have been laboriously studded and patched (and which have the price tags to prove it, typically ringing in at around $600), dingy uniforms from McDonald’s and the Boy Scouts, torn-up tees, and heavy faux-fur jackets.

Dancing through the aisles in a silk kimono and a studded leather vest, Aldridge ventures outside to strike a pose on the street, attracting the ire of a passing punk complete with the gelled hair and ultra-aggressive uniform and lazy Sex Pistols slouch. But he’s not amused. “Show me the money! This is my lifestyle, this is my culture! It’s not fashion!” he yells. “Tumblr-Ass!” Next to us, a Search & Destroy employee starts to laugh. “You know, he’s not a real punk,” he says. “A punk would never wear a jacket that expensive—or say that shit!” So maybe punk isn’t what it used to be on St. Marks—but it’s still pretty fun.

The post Searching for Punk on St. Marks Place With Ruby Aldridge appeared first on Vogue.