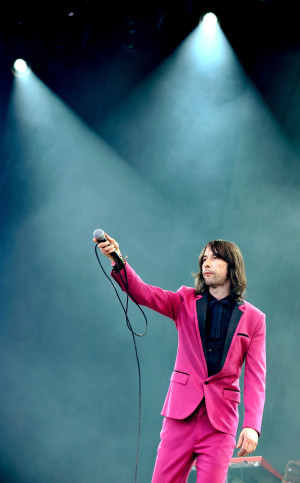 Over the course of 11 albums, the sound of the legendary British rock band Primal Scream has ranged from rock-rock to dance rock (1991’s Mercury Prize–winning Screamadelica) to techno rock to psych rock and beyond. With the release of Chaosmosis, a new record of magnificent and edgy pop songs, we asked their lead singer, Bobby Gillespie, about rock, fashion, politics, and kids—you know, the usual.

The new record is vastly different than the last one (2013’s sweeping, sprawling More Light). Did you make a conscious decision to write dance pop, or is this just what happened?
More Light was a huge experimental double-album psychedelic-free-rock record with up to nine-minute songs where suddenly waltzes would appear in the middle of songs. We were trying to mess with time and make something dark and representative of the times we were living in—but when we were done with that, Primal Scream’s guitarist Andrew Innes and myself went to our studio with the mind-set that we’d try to write pop songs as a kind of reaction to what we’d done before. We didn’t really know what was going to happen, but we both grew up with Top 40 radio, glam rock, punk rock, and that was all about singles. We have that in our soul, in our spirit.

Chaosmosis is a collection of pop songs, sure—but there’s still very heavy stuff underneath it, lyric-wise and otherwise. Are you trying to use beats as a Trojan horse to transmit something secret, or something subversive?
That’s the idea, yeah—to use the conventional way of constructing a pop song to communicate what I feel about the world and my take on relationships. It’s a twist that makes it darker than it seems. When we were growing up, Siouxsie and the Banshees were doing this kind of stuff—they were getting in the charts with songs about mental hospitals! “Happy House”? That was nearly number fucking 10 in the charts! “Christine, the strawberry girl, Christine, banana split lady”—they were writing about a girl with schizophrenia! They were getting in pop magazines and on TV; they were getting played on daytime radio. It’s fucking subversive! They were outsiders bringing outsider subjects to the mainstream. We’re not trying to rip off the Banshees, but that’s kind of where we’re coming from. We want to write about reality.

How did the collaboration with Sky Ferreira come about?
We met a couple years ago—I was obsessed with her song “Everything Is Embarrassing,” and I’d written a chorus for the new record that seemed like it could be good with her. One day soon after, she came to our studio and began writing songs—songs intended for her own album—but we already had this song, “Where the Light Gets In,” so we asked her to duet, and it worked out really cool. The fucking planets were aligned or something.

It’s kind of a romantic anti-love song, if such a thing could be. It’s an anti-love song, but the guy singing it is a romantic. My term for it is “ecstatic depressive realism.” [laughs] That’s what this record is all about.

That’ll sell you a lot of records.
It’s like what John Cale said about Nico: You can’t market suicide. I actually think you can these days, but Nico was 40 years ahead of everybody else.

You’ve also got a couple of songs with Haim on the new record.
They’re fucking amazing singers. They sound like gospel singers. They’ve got this celestial telepathic thing going on, and they can just switch harmonies like that [snaps his fingers]. We had this electronic blue-eyed soul track, “100% or Nothing,” and we wanted a big girl chorus, but we didn’t want session musicians who come in and look at their cell phones in between takes—you know, people who are hitting their notes but are not fucking hitting the soul. They came in and sang on that and on “Trippin’ on Your Love,” and when I drove home from the studio that night, I was fucking floating. It was such a great session.

You’re no stranger to the occasional fashion show, and Riccardo Tisci has designed some things for you that I’ve seen you wear on tour. I’m curious, from your perspective, how does the culture of the fashion world feel compared to the music world?
My wife, Katy England, works with Riccardo—she styles for the Givenchy men’s and women’s shows, and she used to do the same for Alexander McQueen from the beginning up until a few years before his death. Not long after I met her, in early 2001, I went to Paris for a McQueen show, and I was a bit nervous because I didn’t know what to expect from fashion people—I’d always been in the rock ’n’ roll world. But it turned out that a lot of the girls who were working at McQueen were girls I used to go clubbing with. People there turned out to be just as fucking wild as people in bands. But I’ve always been quite amazed to go into the studio and see the creativity—you can’t help but be inspired by being around it.

I went to one of Riccardo’s shows a couple years ago, and they had these really cool black military shirts with zips and studs—they were reminiscent of Throbbing Gristle and the Clash, kind of fascistic. I just thought they’d be perfect for a rock ’n’ roll band press photo, and Riccardo kindly gave us some shirts for the band. Recently, they made me a very cool suit. Sometimes I wear Saint Laurent stuff, and sometimes I wear my own stuff that I’ve had made for me.

You’re also well-known for your progressive politics.
Feel the Bern! We’re feeling the Bern, man! Me and my friends, we’re all for Bernie [Sanders]. It’s great to see young people getting politicized and getting involved. It’s kind of like over here with Jeremy Corbyn. These kids are disenfranchised; they’re looking at no future. Back in my day, Johnny Rotten sang about no future, but we had it really good—we had the welfare state and social democracy! I had a good job, I worked at a printer, and I went to college. Most people I knew were employed. And now if you’re between 18 and 24, you can’t claim housing benefits anymore—that’s why everybody’s living at home with his parents.

Speaking of kids: You have a couple, yes? How old? And what’s their taste in music?
I have two kids—14 and 11, two boys. The youngest one likes listening to Nirvana, and he likes learning rock songs on guitar—Black Sabbath or Deep Purple or Nirvana—but he also listens to Top 40 radio. His big brother likes Skrillex and Diplo and EDM. Ninety-nine percent of it I don’t know. This morning I asked the youngest guy, “What are you listening to?” And he just gave me this look, like, “you know, fuck off.” But he loves Kurt Cobain, so that’s cool.

What’s the first record you ever bought?
Blockbuster! by Sweet. But earlier, me and my brother asked my dad to buy us A Boy Named Sue by Johnny Cash, with “Folsom Prison Blues” live at San Quentin on the B side. When he says, “San Quentin, may you rot and burn in hell,” we’d cheer and go fucking nuts.

This interview has been condensed and edited.