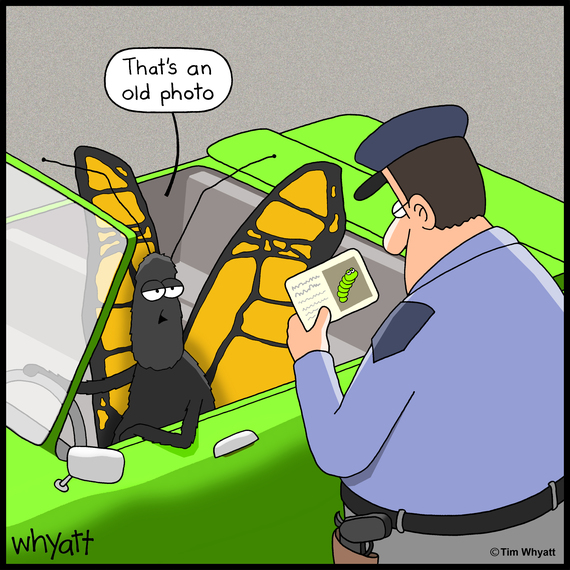 The reason for the current trans bathroom panic is simple: our schooling was terribly deficient.

One of the earliest truths we learn about the world is that generally small living things — puppies, seedlings, babies — grow into larger versions of the same things: dogs, plants, adults. The names might change — “girls” become “women” and “boys” become “men” — but their essence (including whether they are female or male) doesn’t change.

What would happen to someone who never learned about the exceptions? What if someone were never exposed (either in classroom tanks or via video) to the metamorphosis of a tadpole into a frog, or a caterpillar into a butterfly? Would they believe someone who told them that swimming fish can turn into hopping frogs? What picture might their mind conjure up if someone insisted that butterflies were previously caterpillars? Would they lose sight of the butterflies they know and instead imagine a many-legged furry creature with wings somehow strapped around their middle?

The current omnipresent “men in dresses” memes and posts by people mockingly claiming they have turned into pirates simply by putting on a costume are clear and understandable consequences of a truth about U.S. schools: we have not taught about gender diversity. We don’t teach about intersex children, who are born with both “male” and “female” parts, or whose bodies don’t process hormones the way most others do. Most science classes don’t talk much about all the “sex chromosomes” variations that exist, such as XXY and X. We don’t study the many cultures that have more than two genders, including some that give such gender variant individuals special roles and honor. Teachers don’t talk about the cultures that believe in reincarnation, and call someone by their previous name and pronoun, even if those don’t “match” their current body.

Parts of the U.S. have broken an axle in this gaping pothole of ignorance. One of the North Carolina legislators asked to vote on a bill (H.B. 2) he had just seen was overheard to say, “What in the world is ‘gender identity’?” Unequipped to understand how a transgender person is not someone pretending to be something they’re not, he followed his party leaders’ direction and voted to deprive us poor delusional people of the right to pee in peace.

There is a simple reason why it is the federal government that has over the past eight years implemented pro-transgender policies that are now outraging some state and local politicians and pundits. It’s not that they are bleeding-heart liberals (although some may be); it’s that they have learned who transgender people are. Part of what the Obama Administration brought to D.C. was an openness to hearing from and engaging with community members. This openness coincided with the growth of the National Center for Transgender Equality, FORGE’s groundbreaking federal grants from the Department of Justice, the hiring of out trans staffers by the Center for American Progress and many other LGBT and progressive organizations, and the appointment of out transgender people to high-visibility federal positions.

The federal government may seem sprawling, but in truth there are just a few thousand key career bureaucrats who make and implement policies. Over the past eight years, trans activists and openly trans staff of non-trans agencies have met literally hundreds — maybe thousands — of times with these officials. Sometimes the topic under discussion has been specifically transgender, and sometimes it’s been “LGBT.” Many times, it’s been some other policy issue entirely (like the Affordable Care Act) with the trans representatives present not because we are trans, but because we have the professional expertise officials needed. Some of us have even partied at the White House with Executive Branch officials, learning about each other’s lives in venues far removed from laptops and PowerPoints.

All this contact means one thing: federal officials get it. There is no longer a pothole of ignorance on the federal level about who trans people are, or what civil rights we need to have protected.

Clearly, now it’s time to send our road patching/education teams out to politicians at the state and local levels. They are obviously being seriously hampered by the holes in their education.