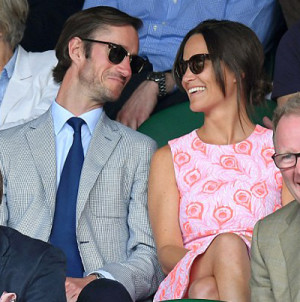 Royal watchers—rejoice. There is happy news coming out of Brexit-entrenched England today. Pippa Middleton, younger sister of Kate, is engaged to James Matthews, her boyfriend of less than a year. Matthews, a hedge fund manager, reportedly proposed to Middleton over the weekend in the Lake District area of England—and apparently took the younger Middleton sister completely by surprise. However, Matthews must have had this in the works for at least a little bit, considering that he apparently asked her father Michael Middleton for permission.

Matthews, 40, and Middleton, 32, had a brief romance in 2012, but reunited last year. The couple spent New Year’s in St. Barth’s—where the future bridegroom’s parents own a hotel. More recently, the couple attended Wimbledon together—where they certainly looked to be very much in love. But beyond the fact that the tournament is a major event in England, the outing also makes sense in light of the fact that the couple are both fairly athletic, and like to lead an active lifestyle. However as romantic as the couple’s past year has been, the next is certainly set to be even more so.

The wedding, which has been predicted to take place in 2017, is bound to be the wedding of the year. Additional details aren’t known at this time. Will Middleton wear a white silk Alexander McQueen gown—like the one she donned as a bridesmaid at the Royal Wedding? Only time will tell, but one thing’s for sure, if she can cause such a stir as a bridal party member, her wedding day look is not likely to disappoint.

The post Pippa Middleton Is Engaged—Here’s What We Know appeared first on Vogue.