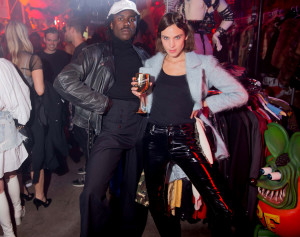 Call it a modern-day Y2K party for the Capitol set. After celebrating China last year at New York City’s oldest dim sum parlor, Nom Wah, Vogue.com hosted its #LastSaturdayinApril party in a part of New York that celebrates old and new: St. Marks Place. Guests from Alexa Chung to SZA headed for a spot of end-of-the-world shopping at Search & Destroy, staying hydrated with Smartwater before sampling some of the customized cocktails featuring Casa Dragones tequila. But it wasn’t just the cocktails that were created for the evening, the entire space came to life thanks to inspiration from artfully curated Pinterest boards. Guests including Lily Aldridge, Candice Huffine, and Halsey enjoyed the scene while sporting fashion-forward looks. Between the luxe ravaged decor and the futuristic NARS makeup looks on models including Ruby Aldridge and Martha Hunt, the atmosphere was a celebration of things to come.

After cocktails, a coterie of chicly clad guests including Chloë Sevigny, Nadja Bender, and Anna Cleveland, headed downstairs to Kenka to join Lisa and Laura Love, Jack McCollough and Lazaro Hernandez, and others for some traditional Japanese street-food fare. And while the food proved to be the ideal Saturday-night feast, the bubbling punctuation to the meal was the mini Moët & Chandon bottles on offer featuring a crystallized V—for Vogue, naturally—which proved to be popular fodder for the Instagram feed. And the setting provided Dev Hynes the ideal opportunity for an impromptu performance bringing everyone including Rick Ross, partying into the wee hours. But with plenty of time to get a refresh before #TheFirstMondayinMay.

The post Party Until the End of the World: Vogue.com Hosts Its Pre–Met Gala Bash appeared first on Vogue.