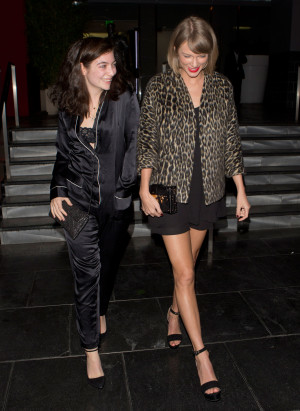 Ever since Taylor Swift assembled her crew for the “Bad Blood” video, style-conscious fans of the 26-year-old superstar have had reason to elevate their #squadgoals. And while on a dinner date with Lorde this past Friday in Los Angeles, she showed that party style can be double the fun with just one bestie, too.

Swift isn’t afraid to switch up her look at the drop of a hat—she’ll go from glam goth to snow angel in the span of a day. In her Isabel Marant leopard topper, she seemed to be channeling the Factory Girl style of Edie Sedgwick. There was a similar louche cool to Lorde’s ensemble, which was a clear nod to the boudoir dressing trend that was all over the runways for Spring. We’ve spied a few A-listers in their pajamas of late, including Zoë Kravitz, and the 19-year-old Lorde showed how chic the idea can work after dark.

The post Party Style Is Double the Fun With a Bestie—Just Ask Taylor Swift and Lorde appeared first on Vogue.