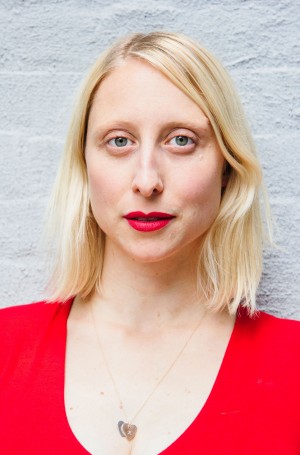 “As a writer, I used to go to book clubs, and I don’t think I’ll ever do that again,” the novelist Emma Straub explains, laughing. She’s referring not to her own book club, a group of neighbors from her old block in Brooklyn’s Prospect Lefferts Gardens, but to her history of accepting invitations to guest star as a visiting author at the gatherings of strangers. “It’s terrible. You show up, they talk about your book for five minutes. Most of the time you’re sitting there eating crudité, listening to someone talk about her husband, and you’re like, ‘I don’t even know you!’ Then sometimes they insult you and your work, and you’re like, ‘Wait, but really: When is it okay for me to go home?’ ”

Straub, in person, is sunny and funny, with the fair-haired loveliness of a milkmaid in a Dutch Renaissance painting. She’s sitting across from me at a small table in a tiny café in the Brooklyn neighborhood of Cobble Hill, near where she and her husband recently bought a home. It’s exactly the type of establishment that might appear in Straub’s new novel, Modern Lovers, out next week. And we’re on the topic of book clubs because her latest book begins with one such get-together, and because, generally speaking, Straub writes the kind of fast-paced, psychologically astute fiction that’s exceedingly book club–friendly.

Modern Lovers is no exception. It tells the story of one summer in the lives of two families living in the leafy outer Brooklyn neighborhood of Ditmas Park. Elizabeth, a musician turned real estate agent, and Andrew, a trust-funded dilettante, are college sweethearts and the parents of a quiet, well-adjusted teenage son, Harry. Down the block live Zoe and Jane, proprietors of a local farm-to-table restaurant and mothers of the preternaturally cool, academically indifferent Ruby, who is also secretly the object of Harry’s burning lust.

The couples are linked by more than just geographical proximity and adolescent hormones: As undergraduates at Oberlin, Elizabeth, Andrew, and Zoe, along with another friend, Lydia, formed a band, and together wrote a punk feminist anthem called “Mistress of Myself.” Lydia went on to become a grunge goddess in the mold of Courtney Love, and, as a solo act, she turned their song into a massive hit, its popularity buoyed by her tragic death at 27 from a heroin overdose. Decades later, a pushy Hollywood producer wants the rights to “Mistress of Myself” for a biopic about Lydia’s life. As Elizabeth, Andrew, and Zoe each confront the implications of granting their permission, the fault lines in their relationships begin to appear, and long-buried secrets start to emerge.

Modern Lovers explores the compromises we make in marriage and parenthood, and that age-old question of what happens to a dream deferred. It’s also, as Vogue’s Megan O’Grady wrote, very much about “the Brooklyn mise-en-scène,” a particular sliver of exurban bourgeois bohemia that by now ought to be familiar even to readers with no actual connection to this city.

It’s a setting that Straub, a native New Yorker born and raised on the Upper West Side, assiduously avoided in her first two novels: 2014’s The Vacationers was about contemporary New Yorkers, but it was set on holiday in Mallorca; 2012’s Laura Lamont’s Life in Pictures was a period piece that went from rural Wisconsin to golden-age Hollywood. Straub says she wrote a New York City novel only at her editor’s insistence, after reluctantly agreeing to postpone the book she really wanted to write: “about a family of cheesemakers in the Hudson Valley.” (That one, she assures me, is on deck.) But once she put aside her reservations and started Modern Lovers, “then,” she says, “I had so much fun.” If you’re smart, by the way, you’ll do just that. I chatted with Straub about living in New York, writing while parenting (she has two kids under 3), and how she came to make what is perhaps the most Brooklyn garment of all time: a jumpsuit printed with the Leah Goren illustration that adorns the Modern Lovers book jacket.

Tell me a little about where this book came from.
We were living in Prospect Lefferts Gardens, on the loveliest block, with the loveliest neighbors. Our next-door neighbor was a guy who was in his late 50s when we moved in. He had a normal job, but he was also a drummer in a band. It just seemed like such a cool thing for a truly adult human to do.

He made me start thinking about people who were out of that postcollege, anything-is-possible zone. For years I tried to write a short story about the teenage son of a couple in a band in a neighborhood like mine. It never went anywhere. One day I realized if I took a step back, it wasn’t really about the band; it was about a couple, their son, their neighborhood. If I took several steps back, it could be a whole book.

You’ve spoken in the past about not wanting to write a book starring people like you in a place like where you live.
Up until the moment I started, I didn’t want to do it.

What changed?
I talked myself into having fun with it by putting it in a part of Brooklyn that doesn’t feel like the Brooklyn in our collective imaginations. There are no brownstones in this book.

There’s one brownstone apartment . . .
That they visit! But they don’t live there. Having the book be about real estate made it fun, too. Real estate is, of course, a shared obsession in New York. It also seemed like a useful way to have these characters think about the choices they’ve made. Elizabeth, the real estate agent, her job is to help people imagine themselves in new spaces. Meanwhile, in her own life, that’s exactly what she hasn’t done. She did what a lot of women do: concentrated on raising her child, on her husband’s happiness. She let her passions evaporate for practical purposes.

I am not a songwriter. I have never written a song, nor can I sing or play an instrument. But I am proud of my pseudo-punk anthem.

In your own life, do you have any similar claim to fame?
When I was 22 or 23, a friend of mine was working for Noah Baumbach as his assistant. They were filming The Squid and the Whale. She was like, “Will you come be an extra? It takes place in the ’80s and I know you have the clothes.”

It was not so much a compliment. But of course I went, and I’m in one scene. It takes place in Ditmas Park, or in Prospect Park South, actually. That’s where Noah Baumbach’s father lived until recently, which I know because when we were looking for houses, my husband and I looked at one which was supercool. We got up to the office, and it had Jonathan Baumbach books everywhere. I was like, “Wait a second!”

In the last few years you’ve written two novels, and had two children. Was that the plan?
Well, before you have a baby, you get approximately 10 months’ notice. That’s something you learn when you’re pregnant: It’s a solid 10 months. In 2012, I got pregnant, and I was like, “Okay, now I know exactly how much time I have to get this book done.” So I did. This was The Vacationers. There is no ticking clock like your own body.

You had a baby four months ago. Was Modern Lovers also a pregnancy book?
I had written approximately none of it. I saw the deadline looming, and I got it done. I’ve always been good about doing things on time and being a diligent worker. But once I had my first son, I understood that I needed to redouble my efforts. There’s no way one can waste time at all.

Your father, Peter Straub, is a well-known and prolific writer of horror fiction. Do you think you write so quickly because you grew up watching him do it?
My dad thinks it’s funny when I describe him as prolific and quick because sometimes it’s taken him several years to write a book. But he’s in his early 70s and he’s written about 20 novels.

Do you aspire to that?
For sure! That’s my goal. I really want this to be my job. I’ve taught, but I don’t think I’m terribly gifted at it. I’m good at this. It’s hard now, certainly, that I have two babies. But I also like to work, and I like to have new projects and ideas.

Speaking of which, I saw a very cool jumpsuit made from your book jacket on Instagram.
Oh, my God. My publisher is making these clutches with the illustrations from my book jacket. I’d heard of Print All Over Me. After they sent me the image of what they were going to do, I realized I could make myself clothes to match. I just couldn’t resist. I had a jumpsuit made, and this caftan dress, and a T-shirt for my husband, and one for my 2 1/2-year-old. They don’t make onesies, but luckily my husband is a graphic designer and handy in this regard, so he’s in charge of making a onesie for the baby.

Your books tend to get published in the summer and billed as beach reads. Did growing up with a dad who writes genre fiction allow you to separate “writing” from the somewhat meaningless notion of “being literary”?
This is something I talk to my dad about a lot. He writes books that are very dark, and early in his career, there were ghosts. But for the last 20 to 25 years, his books have been very dark but completely literary. It’s the way people perceive the idea of the subject matter.

And also the way they’re marketed.
He has all sorts of feelings about that—mostly because his books are really good, and people might assume the reverse because they’re published under the umbrella of a certain genre.

But for me—this is happy-go-lucky Emma—I don’t care. I have some friends who are published in a way that they feel is limiting. Because of the way their jackets look or the way they’re marketed, their books don’t look as smart and funny as they are. I’m not in that position. I’m glad I’m not put in the chick-lit ghetto. But I’m totally happy for someone to describe my book as a beach read. It’s a funny murky zone.

This interview has been condensed and edited.

The post Modern Lovers Author Emma Straub on Brooklyn, Babies, and Why She Embraces the Beach Read Label appeared first on Vogue.