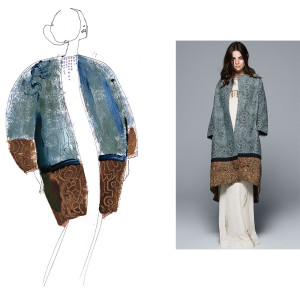 Exactly one week after the final day of the Fall ’16 runway season, H&M held a preview of its Conscious Exclusive collection at the Musée des Arts Décoratifs in Paris. While this may be the mega brand’s fifth undertaking focused on sustainable materials, it’s the first to be so directly influenced by historical fashion—from an 18th-century-inspired collarless coat in recycled polyester and organic silk jacquard to Art Deco–esque drop earrings in “denimite,” a marbled solid derived from recycled jeans. The collection will arrive in approximately 180 stores worldwide on April 7, the same day that the decorative arts museum unveils an ambitious exhibition, “Fashion Forward: 3 Centuries of Fashion.” H&M is the exclusive sponsor.

If it’s tempting to consider the brand’s generous support as a quid pro quo for the design team’s access to the museum’s archives, this collection registers as a nuanced experiment in addressing past and future. It also happens to correspond neatly with the present trend for all things romantic. To wit, the high neckline cropped blouse and period slippers both contain Tencel, a silky textile that approximates viscose but comes from dissolved wood pulp. The delicate beading on a tunic and wide-legged trouser is largely composed of recycled glass.

For the presentation, a salon staged like a sleek atelier was propped with art tomes on Caravaggio and Botticelli; take a close look at the dress worn by Julia Restoin Roitfeld, who fronts the campaign, and you’ll see a digitally printed segment of the latter’s La Primavera. Anna Gedda, H&M’s head of sustainability, argues that this collection could encourage people to shift away from the mind-set of disposable fashion. “I think people will feel the fashion history in these garments; it feels like it has a higher purpose in that sense. And it’s very timeless, which is also what sustainable fashion is about.”

As part of the preview, Gedda participated in a panel discussion with industry veterans Julie Gilhart, Scott Mackinlay Hahn, and Dilys Williams that was moderated by Simon Collins, former dean of the school of fashion at Parsons School of Design. Among the topics discussed: “Closing the loop on fashion” by recycling old clothing (so far, the company has collected 12,000 tons of garments) and ensuring optimal conditions for the 1.6 million workers employed by H&M suppliers (the roughly 1,900 factories must adhere to a recently revised Sustainability Commitment).

All these actions—outlined in greater detail on the company’s website—resonate admirably for anyone conflicted about fast fashion; they also position the ultimate debate about consuming within the context of doing it responsibly. As Gedda reasons, “If you can find a way to make sure that resources are used in a sustainable way, consumption can really be a driver of growth and social development. Then we need to make sure customers feel they are playing a part in the choices—that when they are consuming, they do it in a conscious way.”

Which does not preclude excitement. While it’s unlikely this Conscious Exclusive collection will generate hysteria on par with the recent Balmain collab, H&M creative adviser Ann-Sofie Johansson says April 7 can’t come soon enough. “I hope there will be a little bit of a line outside the stores—not because lines are good, but because it tells us something,” she says, adding that she expects people to be surprised by the level of workmanship. “We wanted the pieces to look really special. In that way, you might save them for a longer time and they might become more precious to you.”

The exhibition, meanwhile, celebrates the 30th anniversary of the Musée des Arts de la Mode (one of the departments of the Musée des Arts Décoratifs) by spanning the 18th century to the present, from Louis XV to Nicolas Ghesquière for Louis Vuitton, as overseen by chief curator Pamela Golbin. Perhaps unsurprisingly, it will also include a look from Conscious Exclusive.

The post Merging Past and Future, H&M’s Conscious Exclusive Collection Takes Cues From 300 Years of Fashion appeared first on Vogue.