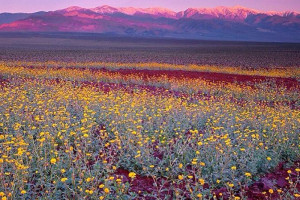 Rarely (every 14 years or so), a super bloom erupts in Death Valley and the desert is briefly (carpeted would be too extreme) finely brushed with fields of purple, yellow, white, and pale pink wildflowers. Thanks to the almost El Niño, we’re having a super bloom this year. And for a brief moment, one of the most desolate places in the world won’t seem quite so desolate.

I’ve never been. I’ve always found the descriptions of Death Valley daunting. Death Valley closes in mid-May—it simply gets too hot. It has the highest recorded temperature in the world, 134 degrees; ghost towns on the highway, literal ghost towns without even a ticket-taker or a souvenir shop; an occasional stone house that crumbled on a cliffside with an inexplicable sign that says Historical Monument; and North America’s lowest point, in Badwater Basin’s salt flats. And I’m not sure how I feel about sea level or below sea level when the only sea around is sand. But somehow the idea of the super bloom appealed to me even though I couldn’t get a reservation at the high-end (read: incredibly pricey) Furnace Creek Inn and only one room could be found in the valley at all, at a local motel with a fairly decent (if deceptive) online rating. When you hit Highway 14 heading north, deep into the Mojave Desert, the road becomes a ribbon through the otherwise endless unpopulated landscape, which at first appears completely stark and barren. But relax, take a breath, erase the palette of the landscape in your mind to black-and-white and let it repopulate the foliage into shades of green, the palest mint, sage, olive, moss; pure white rocks and quartzite with tiny orange veins; shards of mica, sparkling as the sun hits the sand; a tiny patch of purple flowers; a lone prickly pear cactus with a pale pink bulbous fruit. On the side of the road, the black pyramid-like hills become a beacon behind you as, in a moment, you’re in Red Rock Canyon, the dramatic orange rocks burned by the sun to a color that resembles (and possibly inspired) Frank Lloyd Wright red. And there’s nothing else around except an occasional car going to or from Death Valley, a black crow, a funny highway sign that warns of BLOWING DUST, a rumor of rattlesnakes.

The last leg of the drive is difficult, sharp curves and a steep descent to the canyon below with guardrails that switch from one side of the skinny highway to the other at a moment’s notice. Keep both hands on the wheel, and it’s a good idea to observe the intermittent but insistent 25 mph speed-limit signs and chew gum since the elevation is about to take an extreme drop . . . and you’re in Death Valley.

Take a hike in Mosaic Canyon. Drive down the long dirt rocky road—good luck to you if you get a flat—the destination is worth it. The extraordinary geological cave-like structure with twists and turns feels as if you’re in a magic cavern, with its naturally formed and polished marble walls and surfaces that are astonishingly cool to the touch, and goofy tourists who are taking just as many pictures as you are. We drove past but didn’t stop at the Devil’s Corn Field—figuring that there had to be a reason why they named it that—on to the astonishing white sand dunes that look as if you’ve suddenly landed in the Sahara. The breadth of the landscape is simply astonishing. And then a few miles down the road, a swath of gold over the desert floor, as if someone’s laid down a silk scrim and dotted the desert with a yellow sheen. It’s somewhat of an optical illusion, as when you get out of the car and walk across the desert floor it seems less dramatic: a tiny yellow flower, a tiny yellow flower, a tiny yellow flower, a patch of white rocks with a tiny cluster of white flowers almost like the floral version of camouflage. But turn your head to the left and it’s as if a delicate gold, if somewhat threadbare, carpet is covering the ground. And you can’t help but feel kissed by magic.

Our motel was somewhat reminiscent of a Robert Mitchum movie in the ’50s—vaguely noir. The 4-by-4 room right on the highway was not exactly an invitation to relax, except that nobody drives on the highway at night and the sky is astonishingly lit with more stars than you could even imagine and seems to stretch right down to the desert floor at the horizon. Spectacular. When we turned our lights off to go to sleep, there was suddenly an odd, eerie, high-pitched tone in the room. (No, I am not making this up.) And my husband said to me, “What is that?”

“Why are you laughing?”