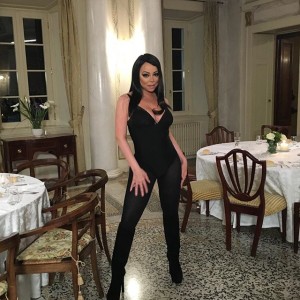 The wise butterfly Mariah Carey once said, “I do not think I reinvent myself. Wearing my hair differently or changing my style of dress is playing dress-up. I don’t take it too seriously.” And in light of her recent costume bash, this certainly rings true. Never one to shy away from a little spectacle, Carey recently threw a party in Europe while on her Sweet Sweet Fantasy tour and requested that all of her 40 guests come wearing their favorite Mariah Carey look. The singer posted two photos from inside the Italian venue dressed as the evil, black lingerie–clad Bianca from her 1999 “Heartbreaker” video. Who knows what her other guests had to drum up to abide by the strict dress code—a white tank and briefs with a rainbow spray-painted across their chest, perhaps, or a glistening gold tube top and belly chain with giant windblown curls. One can only imagine the attire for her pending nuptials to billionaire James Packer, which is reportedly going to be filmed by E! for an eight-episode docuseries called, what else?, Mariah’s World.

And it is her world—we’re just living in it. We’re also living in an age where dress code norms are changing, or dissolving entirely. Wedding invites now call for things like “farm fancy,” or “mountain elegant.” What would traditionally be known as a formal gala can have a theme attached to it such as “safari black tie” or even “tech white tie” (yes, we at Vogue are guilty of the unusual dress requirement). The good thing is that these new mores of party dressing allow us to get creative and are often a much more entertaining way to celebrate, even if it means dressing up like your host did once in a late-’90s music video.

Below, six Vogue staffers share a few memorable and offbeat dress codes they’ve been given in the past, à la Mimi.

“I’ve been to numerous themed parties from ‘Gossip Girl’ to ‘black-tie safari,’ but dressing like the host is truly genius and inspiring. I think for my birthday party this year, I’ll issue a dress code, because who wouldn’t want to see different interpretations of monochromatic looks in turtlenecks. In August.” —Edward Barsamian, Vogue.com Style Editor

“‘Snappy casual’—I recall this from a Thursday night welcome party for a friend’s wedding years ago. I interpreted it as ‘no need to wear a cocktail dress, but no jeans or flip-flops—come correct.’ Also, ‘coastal chic’—a stylish friend requested this at a rehearsal dinner on the Outer Banks in North Carolina. The result was nautical stripes, crisp white sailor-y pants, navy blazers, and some smart floral prints. It was the couple’s way of saying beachy, but no beach bumming.” —Michelle Ruiz, Vogue.com Contributing Editor

“I am going to a wedding in the Catskills in June that calls for ‘mountain elegant.’ I’m going to wear a J.W.Anderson LBD and some barn- and field-friendly footwear, perhaps Maryam Nassir Zadeh’s lug-soled Mary Janes.” —Eviana Hartman, Vogue.com Contributing Editor

“Wow, so many ridiculous ones . . . ‘gaucho smart,’ ‘Dangerous Liaisons,’ ‘on the fringe,’ ‘Slim Aarons,’ and white tie at an event at noon on a volcanic beach only accessible by boat.” —Chloe Malle, Vogue Social Editor

“A friend of mine is hosting a birthday party themed ‘Bedouin disco,’ whatever that means! And does ’tech white tie’ count?” —Mark Guiducci, Vogue Arts Editor

The post Mariah Carey Told Her Friends to Come to Her Birthday Party Dressed as Mariah Carey—No, Seriously appeared first on Vogue.