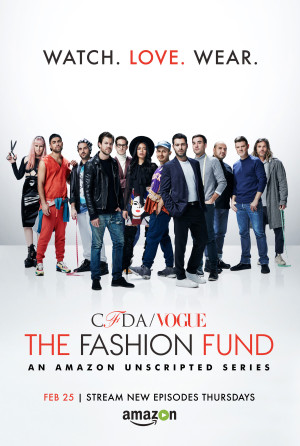 Reality TV shows have this amazing ability of showing you something that actually happened—at least in the sense that people did these things with the knowledge that it was recorded—while breeding a sense of total and utter distrust. The conflicts are too close to the surface, the world feels about six people big, and everyone takes their calls on speakerphone. Fashion-based contest shows, too, are typically populated with designers either fresh out of school or fished out of their attics, selected seemingly more for their antics than the attire they create, and destined more for the late-night cable-rerun circuit than Net-a-Porter. It can feel like a parallel universe, one that you’re not necessarily sorry you’re missing. Not so The Fashion Fund, a series based around the CFDA/Vogue Fashion Fund that’s streaming its third season on Amazon (the second episode premiered yesterday): Everything about the prize and the show around it is different, because it’s real. Really real. The award lives in our world, goes to people who work within it, and affects them in real time. And with the right winner—previous years have included Alexander Wang and Joseph Altuzarra—it affects the future of fashion.

The briefest of histories: The Council of Fashion Designers of America was founded in the 1960s by Eleanor Lambert, a publicist and philanthropist with a fashionable bent, who was married to a journalist and newspaper magnate. The mission of the foundation: to nurture homegrown fashion talent and ultimately usher it into world-class success, providing everything from scholarships to design school to later-stage career mentorship. It’s like a fashion super PAC, but nothing sinister. Cut to September 11, 2001, during New York Fashion Week’s Spring 2002 season. Following the attacks at the World Trade Center and the subsequent cancellation of the week’s events, many young designers’ dreams of big breaks and inaugural shows were also torn asunder. (Compared to the tragedy that happened that day, this is, of course, nothing. But for some new designers who lost their businesses, it was also everything.) In the reaction and rethinking that followed, the fashion landscape was reevaluated and found to be, if not wholly inhospitable to new talent, certainly difficult to navigate without support. Soon after, the CFDA and Vogue began the Fashion Fund, which was devoted to supporting young American designers and reviving the national fashion dream through a powerful merger of grant money and media influence.

It’s no shoo-in or easy layup, and no fly-by-night schemers are allowed. To apply, one must be based in the United States, have been in business for at least two years, have some sort of staff, and have received support from top retailers or significant recent media coverage. So in other words, you can’t print off a certificate online and become an ordained designer instantly. Though you might like to. Because this is what a designer gets if he or she wins the CVFF, in three words: exposure, money, mentorship. In a few more: a growing media presence, zingy SEO, brand partnerships, network-y and celebrity connections. (Consider: The chance to meet-cute with Kanye. The even more remote but tantalizing possibility of making Kanye smile.)

And, as any Sunday afternoon documentary on the lives of unhappy lottery winners will tell you, money alone isn’t the answer, though in the current economic and retail climate, it really, really helps. The cash prize, usually $300,000 to the winner, with $150,000 to two runners-up, has been adjusted up this year, for a $400,000 first prize (although, as we will come to see, when the CFDA and Vogue coffers combine, anything can happen). To say this amount of money is “helpful” would be to invoke the kind of sweet euphemism a quietly desperate candidate might whisper in an entry video. It’s a life-changing amount of money, especially for a young designer during a particularly tough downturn. But it’s the same kind of “life changing” that a vacation or a great haircut can be—it changes your life a lot for a while, and then fades in time as just one of the high points along one’s timeline. Which is to say, it’s not permanent, not self-perpetuating. Ultimately, and possibly quickly, it will be gone. Which is why along with the cash lump sum, there’s also the arguably more valuable commitment of mentorship by an industry leader, meted out over a career in crucial installments.

And last of the big three—the media exposure. The attention. The hashtagability. Whether traditional or new wave, it’s still the lifeblood of up-and-coming ambitious designers. That’s what Vogue brings to the fund. And that’s not laurel-resting or own-horn-tooting—that’s part of the landscape reevaluation out of which this whole merger was born. Vogue Editor in Chief Anna Wintour especially saw the opportunity for the publication to act as a bellwether for young talent. It’s mutually beneficial—American Vogue promoting American designers first stateside, then within the international landscape.

Which brings us to the current competition and the related television programming: With this last week’s premiere of The Fashion Fund, we can all see history being made. In comic book terms, it’s a shared universe—the luminaries on the board, the eager hopefuls in the hot seat, the previous winners (so many now big names on the scene), and the up-to-the-minute economics and logistics of the industry are all at play, and are frequently invoked in the show with real-life gravitas. New York plays itself. It’s not fantasy. It’s not fiction. It’s fashion as we’re living it. The award functions as a catalyst for designers, and not a one-season cycle of fame and failure.
So it’s not just the green-lighted 15 minutes of fame and a financial carrot. It’s not just the fashion world saying, “Jump!” Although, of course, it is that, too. It’s a chance to meld entrepreneurship and apprenticeship, to glean the wisdom of those further ahead without having to fetch coffee for them. It’s an effort to make New York into a sunny, verdant fashion paradise, where designers benefit from competition and aren’t destroyed by it. It’s a come-up to everyone who participates. One is reminded of rising tides and a horizon scattered with boats, even if they’re full of genderless sportswear and sustainable shoes.

It’s all real. And just like all these up-and-comers, you’re going to want to keep your eye on it.

The post It’s Not Easy to Be a Young Designer: Why We Need the CVFF More Than Ever in 2016 appeared first on Vogue.