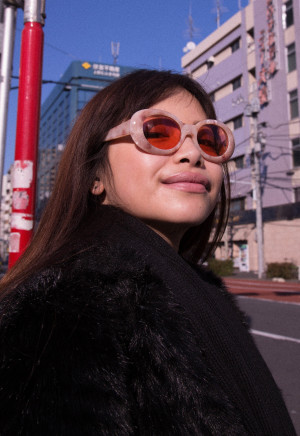 According to 19-year-old artist Yuki Haze, there’s a revolution happening in the United Kingdom. “This is the year of the girl!” says Haze. “I’ve been saying that to everybody. People are actually waking up and smelling the whatever.” The whatever could be the fact that she’s on a roll: Fresh off of her Made Gold collaboration, Haze has just launched a feminist collective at Sukeban.co.uk with her partner Erika Bowes. Sukeban (which means “delinquent girl” or “boss girl” in Japanese) focuses on creative young women, a group that Haze believes is largely neglected compared to their male counterparts. “There is a strong youth culture [in London], and everyone documents it, but I do think girls are less represented, like girl skaters, girl stylists, girl thrifters,” says Haze. “The girls who we use, stylists, models, or designers, they are all really young and up-and-coming creatives—and they are all feminists. We are shooting them and styling them, and we are interviewing them as well.” The site is divided into sections: “Editorials,” which includes shoots by Haze and Bowes, as well as “Girls by Girls,” which is a more intimate story of friends photographing and profiling their friends in their homes or workspaces.

The idea to launch Sukeban happened during a family trip to Japan, where Haze met Bowes through Instagram. “I was over in Tokyo, and there was this girl who I was following for ages and is quite a big Instagram persona. She messaged me and was like, ‘Are you in Tokyo? Let’s hang out,’ ” says Haze. “We spent the whole time talking about the feminist movement, which is so great, and [about] collectives. We wanted to expand on that and cover those bits of underground culture that people haven’t covered before.” Haze, who is half-Dutch, half-Japanese, makes an effort to include a diverse group of subjects on the site. “There is a lot of movement obviously from white feminists, and there are a lot of black feminists, but we feel that there hasn’t been a big movement in the U.K. by Asian girls, so we were like, ‘Let’s do something!’ ” says Haze.

As far as the fashion, Haze strongly believes in highlighting fresh talent; Sukeban’s recent shoots include pieces by Sophie Cull-Candy and Kate Zelentsova worn by the likes of Lola, a 19-year-old musician, or Cleo, an 18-year-old artist. Sukeban’s interviews offer the designer and the subject an opportunity to voice their opinions on everything from frustrations with the fashion industry to other females they respect. “A lot of people are intimidated by fashion and are like, ‘Where do I start?’ ” says Haze. “Fashion is such a competitive industry, and if you are up and coming and trying to do something and you have no idea about anything, you kind of get lost. We are trying to promote other people.” They also want to provide something of a resource for young creatives, a place where they can go to find like-minded spirits, “and see who they can work with, and what kind of level people are at, and where they can get inspiration for shoots.” Seems like Sukeban’s inspiration won’t be running out anytime soon, either.

The post Inside the Sukeban Revolution appeared first on Vogue.