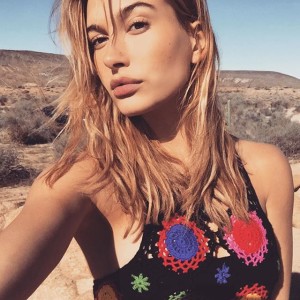 It’s certainly not hard to understand her appeal: Baldwin’s look skews sensual, with power brows, lengthy lashes, and radiant skin that’s most often accompanied by a bold matte lip in nude, fleshy pink, or bordeaux. French braids, chokers, topknots, beanies, and a soft spot for Justin Bieber have made Baldwin the latest face of the new generation of It girl. With a new power agency behind her, she seems poised to take her beauty inspiration to the next level. Here, 18 of our favorite above-the-neck moments from the model’s Instagram.