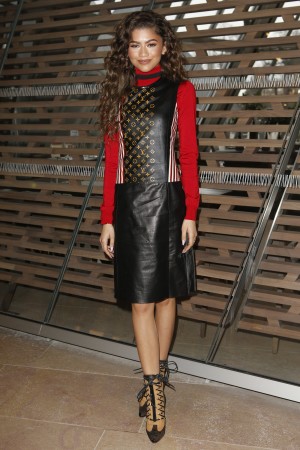 Seventy-two hours. Last season that was all it took for pop star and style wunderkind Zendaya to completely take over Paris Fashion Week as its breakout star. From a nonstop show schedule to by-the-hour costume changes, the chameleonic singer was a quick study in Fashion Week domination. And this time around, the new face of CoverGirl needed only one show to make a complete splash.

Swooping into the French capital to attend the Louis Vuitton collection, the “Something New” singer took her position beside her Young Hollywood peers—Selena Gomez, Jaden Smith, Léa Seydoux—who dotted the show’s Fall 2016 front row. And as the pictures she snapped throughout the day reveal, Zendaya looked every bit the seasoned Fashion Week pro. Whether gamely posing backstage with a gaggle of LV models, laughing it up with Nicolas Ghesquière, or taking on the awaiting paparazzi, she looked right at home. Here, she shares the best of her day, which included croissants in bed and, as she tells us, the Vuitton boots she’s already coveting for fall.

Watch all of our Fall 2016 Ready-to-Wear videos:

The post How Zendaya Took On Louis Vuitton’s Front Row Like a Seasoned Pro appeared first on Vogue.