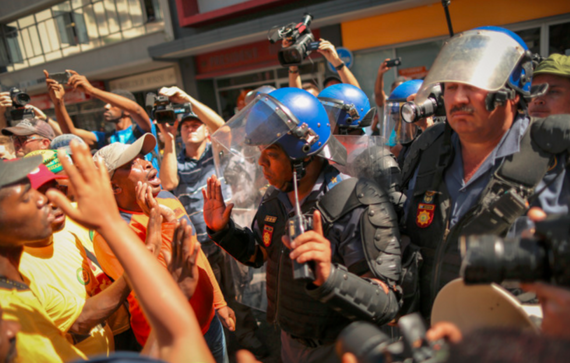 Come 1994, many South Africans assumed that the official end of apartheid meant “job done – we are a democracy.” But despite an excellent constitution and world-class public institutions, the country looks increasingly dysfunctional.

So if a great constitution and carefully designed public institutions don’t make a democracy, what was left out? I believe that, crucially, civil society was not retooled for freedom. Two concepts drawn from education research may hold a possible solution to this shortcoming: first, the idea that knowledge is socially constructed and, second, the notion that self-efficacy is a significant factor in ability.

In an authoritarian state, there are a limited number of levers of power. Control of those levers is centralised. Ordinary citizens cannot easily fix societal wrongs, nor safely organise themselves into groups that aren’t sanctioned by the state.

In a democracy, though, ordinary citizens should have access to lesser levers that work to their personal or, in small groups, collective benefit. The workings of government are open to ordinary citizens. They can attend public meetings and access government policies and documents. This is particularly valuable at a local government level, where officials who control the processes that affect ordinary people’s lives are close to hand and should – in theory – be easy to reach.

But such levers are not familiar to most citizens in a country like South Africa, which has a strong culture of protest. This culture does not recognise that there are other levers of power besides those held by leaders in high places. At my own university, I’ve asked protesting students how the institution’s management could do better. Their response? “Don’t ask me. We have highly paid leaders who should be solving these problems.”

This suggests that change can only be achieved by supplication. Whether this is polite but possibly ineffectual or expressed with extreme anger, such supplication starts from the same place: the view that an individual or small groups of individuals lack agency. One of the biggest drawbacks of this approach is its short-term nature. An example from my own small town: in 2014, 3,000 residents signed a petition calling on the owners (government rail monopoly Transnet) to save the historic railway station from being dismantled by looters. The municipality and the provincial heritage authority had failed to act on earlier complaints.

That is an instance of supplication – asking or trying to order the authorities to fix things. The property was fenced off, security guards installed and the worst of the damage was repaired. But it was just a quick fix: residents were not empowered in any way. They have been excluded from planning the future use of the station site. They do not have the leverage to demand such inclusion unless they start another petition campaign.

This illustrates how problem solving has stalled in South Africa. The government is trying to take on too much and failing. Many transitional societies run into the same problem: there is too much to do and government becomes bogged down. With a more activist civil society, the weight of doing everything can be lifted from government so it can focus on bigger problems.

But how can these alternatives be introduced to South Africans?

Can we learn from education?

The idea that knowledge is socially constructed deviates from the earlier view of education theory that was more cognitive. In the social construction view, knowledge is not just about what you know, but also about how you interact with others and what you are.

What is missing in South Africa is the knowledge of what it means to be a citizen of a free, democratic society. That is not just about knowing that one is a citizen, but knowing how one should behave and interact with others. A social discourse is part of that knowing: when we enter a situation where we are unhappy with how others perform, how do we interact with them? How do you react when someone criticises the way you perform? These are not trivial questions in a multicultural country.

Self-efficacy is the perception that individuals are able to control events that influence their lives. In education, that sort of belief leads to better educational outcomes. It confers a kind of self-belief that you will be able to solve a hard problem.

This idea fits well with what Black Consciousness leader and activist Steve Biko called psychological liberation, which calls on oppressed people to liberate themselves from the externally imposed idea that they’re incapable and so should be looking for external salvation.

These ideas apply equally well in understanding how to reconfigure a failing society.

In a dysfunctional society, the norm becomes doing what is actually antisocial. In a place like South Africa that has never been “normal” in the sense of a free, open society where individuals have agency, there is no norm on which to build. Antisocial behaviours become the new normal when the shackles are loosed. There are some who believe that a return to an authoritarian society is the answer. It’s not.

Instead I propose drawing on those two ideas from education theory to build a functioning civil society in which the “normal” involves behaving in a socially aware manner, rather than doing what you like.

Many levers for democracy

I am not dismissing protest as a tool, but merely arguing that it is not the only tool. Stopping at protest implies that a society is not really democratic because treating supplication to the powerful as the only option for change implies that power relations cannot shift.

Ultimately a society can only work if the levers of power are effectively wielded. In an authoritarian system, that means the levers are centralised and tightly held. In a democracy, they are distributed and loosely held. For a genuine free democracy to work, citizens need to learn what it means to live free. A large part of that involves grasping the levers of power at their disposal.

This article was originally published on The Conversation. Read the original article.