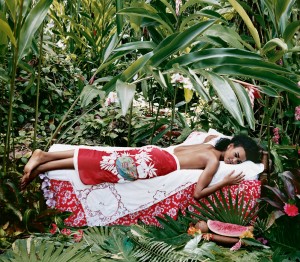 It’s a well-worn truism that a trip to the salon is a substitute for therapy. “It’s a rare and special time of sitting still,” says Andi Scarbrough, owner of Framed Salon in Santa Monica, California. “In this space, issues frequently come up.” Or, put another way, “would you like bangs with that midlife crisis?”

What I’ve endured over the past fifteen months or so might be more of a three-eighths-life crisis, but between an early divorce, the illness and subsequent loss of a parent, and escalating career stress, I’ll take therapy wherever I can grab it. And chalk it up to circa-2016 California, but I’ve lately found that New Age treatments like reiki and flower essences have done far more for me than medication and talk therapy. Still, one setback persists: My losses have manifested in the shedding of about half the volume of my long, formerly thick, frequently hidden-behind hair.

And so when, during a recent consultation with Vogue-approved stylist turned shaman Colleen McCann, she described her friend Scarbrough as “chieftess of the psychic hair salon wigwam,” I scheduled an appointment. After all, what better way to fix what’s wrong in my head than to have a healing session focused—quite literally—on my head?

The salon, nestled on a quiet stretch of Pico Boulevard near a Trader Joe’s and the 405, doesn’t look or feel like a witches’ lair. It’s bright and cheerful and a touch old-fashioned—as is Scarbrough, a crimson-lipped Texas native armed with a master’s degree in something called spiritual psychology. (This, she explains, is a program for “therapists, coaches, doctors, people from all walks of life.”) When I arrive, before we so much as broach the topic of color and cut, she places her hands on my head to “clear the space and open your crown chakra,” states an intention—to hear me with empathy and without judgment and to “impart a sense of well-being that lasts long after your blow-dry.” She then asks me to take a few deep breaths and set one for myself (to calm the f— down, I decide). Next, Scarbrough spends half an hour listening to me vent, after which I feel significantly lighter. “Healing starts in being heard, witnessed—not fixed,” she explains.

Of course, my hair itself does need to be fixed—starting with the color, which the summer sun has faded from chocolate brown to brassy reddish bronze, and which has been marred at the crown by an ever-widening flotilla of grays. (I decline a cut, though am intrigued by Scarbrough’s description of how she conducts them: with a meditation inspired by a “shamanic cutting-of-cords ceremony.”) “The Crown is where we connect to the spirit,” she explains. “It’s the energy center on top of the head where we access energy that fosters a deep sense of serenity, self-trust, and inner wisdom.” When things in this zone are out of whack, she adds, the result is “feelings of confusion, self-doubt, isolation, and depression.”

Scarbrough then paints on a single-process base hue, folding in a few fine caramel highlights for depth. I notice a familiar chemical smell—not something I’d expected from a New Age-minded hairstylist. “Sometimes the most pristine ingredients are not always the most effective for the specific cause,” she explains of her decision to use Redken color formulas. “In those cases, I bless it, use it, and release all judgments of myself or the item; a negative opinion of my choice often has more harmful impact than the selection itself.”

Environmentalist’s guilt thus resolved, I perk up as Scarbrough presents me with a bin full of crystals and asks me to choose one. I dither for a moment, then grab a clear, pale-green polished oval. It’s fluorite, said to “quiet mental chatter and move your questions into the heart space.” I clutch it in my hand for the rest of the visit. As the color absorbs, Scarbrough decides I could use a heart healing—and really, who couldn’t? She places her hands on the center of my chest and utters lulling words; I feel my shoulders unfurl, my spine lengthen. It’s as if my emotional discord—weeks’ worth of bad juju—is physically leaving my body.

After a crown-chakra-tickling scalp massage with a cool, minty hydrating conditioner—mixed with Scarbrough’s hand-mixed blend of rosemary, lavender, cypress, and clary sage essential oils designed to stimulate the follicles—she blow-dries my hair, offering up an unexpected observation: It’s growing back. With a deft twist of the brush, she isolates a discernible short second layer of strands to show me. “It looks like something traumatic happened to you about eight months ago, but this is the regrowth,” she says. “You should take comfort in that.”

One inhalation of a palo-santo- and clary-sage-oiled steam towel later, I behold the result: I look almost like healthy-haired, brunette me again. Scarbrough then places her hands back on my head, encouraging me to close my eyes and reflect on my intention over some deep breaths to seal the session, and presents me with my parting gifts: a pouch for my crystal which also contains a small journal, and the recipe for the essential-oil treatment. I step out into the sun, secure in the feeling that while my hair may be a work in progress, spiritually, I’m shining.

The post Here’s Why You Need an Energy-Clearing Hair Healer on Speed Dial appeared first on Vogue.