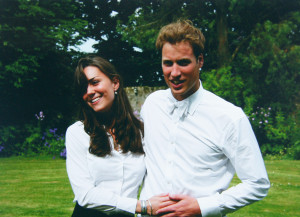 William and Kate captured the world’s attention when their courtship began more than a decade ago as students at St. Andrews. Since then, the public has followed their every move—holidays, a public split and reconciliation, and, of course, Kate’s wardrobe—culminating in a reported 3 billion people watching their April 29, 2011, nuptials.

As a married couple, the Duke and Duchess of Cambridge continue to grab headlines with their public appearances and travels—sporting cowboy hats at a rodeo in Calgary, receiving personalized jerseys from LeBron James in Brooklyn—and recaptured the kind of fervent attention that surrounded their wedding as the world eagerly awaited the birth of their two children.

While the couple is famously private, and very protective of little George and Charlotte (photographers were not allowed to photograph George’s first day at his Montessori school), they have shared quite a few utterly charming family snapshots, some even taken by Kate herself. Here, a look back at William and Kate’s most memorable moments, from the earliest days to their second child together, and beyond.

The post Happy Anniversary, William and Kate! A Look Back at Their Most Memorable Moments appeared first on Vogue.