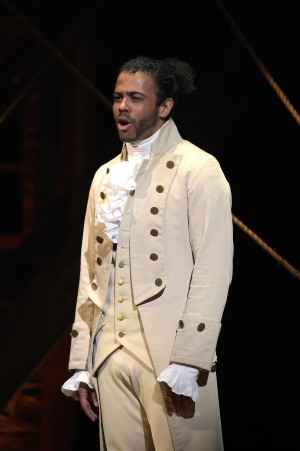 Last week when a new report announced Lin-Manuel Miranda would be leaving Hamilton in July, I happened to be having lunch with Daveed Diggs. The breakout star and breakneck rapper, who nails the dual roles of Marquis de Lafayette and Thomas Jefferson in the Broadway sensation, was hungry after two performances the day before, and hoarse from a robust round of Tony campaigning—he’s a favorite in the featured actor in a musical category on Sunday. But standing in the takeout window at Patsy’s pizza in East Harlem wearing jorts, high-tops, and a henley tee, he didn’t appear to be freaked out that Hamilton’s heart was (reportedly) leaving the show.

“Everyone gets stressed out about the original cast leaving, but people are out all the time, and the show works,” Diggs, 34, said. In contrast to his explosive onstage personas (and, perhaps, in an effort to take a break from them), the Oakland, California, native and frontman of the rap group Clipping is quieter than I expected. When I point out that Miranda’s departure was bound to spark speculation about his own and that of his fellow castmates, Diggs demurs: “I saw the show without me in it and it was incredible,” he said, holding a gooey cheese slice. “I didn’t miss me at all.”

Diggs’s adoring public might respectfully disagree. While much well-deserved glory goes to Miranda and Leslie Odom, Jr., as the cold-as-ice Aaron Burr, Hamilton fanatics agree that Diggs steals the show. In Act 1, Diggs commands the stage as “America’s favorite fighting Frenchman” Lafayette, dropping the fastest rap in Broadway history in “Guns and Ships”—according to FiveThirtyEight, a dizzying 19 words in three seconds, and in an intoxicating French accent, no less. (“I keep waiting for people to be really upset about it,” Diggs says. “It’s a bastardized impression of when French rappers try to speak English.”) In Act 2, he shakes out his man-bun and unleashes the super freak that is Jefferson, whom he portrays as a braggadocious yet charming dandy, and a master foil for Miranda during two hyped cabinet rap battles.

The performances have earned Diggs a Tony nomination in the same category as his costars Christopher Jackson (George Washington) and Jonathan Groff (King George)—“We are now mortal enemies,” he jokes—and a spot on Hollywood’s most-wanted list. By the time Hamilton ended its off-Broadway run at The Public Theater last year, Diggs had landed an agent at WME. In the year since, he’s been auditioning and taking meetings for “dream roles” in film and TV.

“It’s like existing in a parallel universe,” he recalled of a trip to Los Angeles just before Hamilton’s Broadway debut. “I would park in places that I had parked a million times and go into buildings I had maybe done auditions in in the tiny room in the front, and as soon as I walked in someone at the desk is like, ‘Daveed Diggs! So excited you’re here. Would you like some water?’ ”

Whether the siren call of Hollywood means his days at Hamilton are numbered remains to be seen; he and the rest of the original cast are currently renegotiating their contracts. “I don’t know the answer,” he says pensively. “I love doing the show. My reason to leave wouldn’t be because I got excited about doing something better. It’s just because I’ve lived this life for a long time and . . . You need to refill yourself. You need to have other experiences.”

In his pre-Hamilton days, Diggs taught middle school poetry (incorporating a celebrated district-wide rap curriculum), and struggled to make ends meet with regional theater. About four years ago, he leapt at the paycheck for a McDonald’s steak-and-egg biscuit commercial (thank you, fan site, Hamilbabes). “It was so necessary,” he recalls. “I had no money.” At times in New York, he couch-surfed or slept on the subway, but neither his parents nor his longtime girlfriend ever suggested he abandon the whole acting thing to take a paying office job.

“You’re not guaranteed particularly high returns when you decide to take on this lifestyle and it’s not like there was much of a cushion growing up. We were poor,” Diggs says. “But it was always the most important to my parents that I do something that I love.” This was especially true of Diggs’s father, who is a bus driver in San Francisco. “My dad, particularly, for the last 15 years has worked a job that he hates.” Diggs says that the success of Hamilton, and the rush of his Tony nomination, is dedicated to his parents.

That the stars aligned for Hamilton, he says, was a magical “accident.” Diggs, a friend of Miranda and Hamilton director Thomas Kail from the rap group Freestyle Love Supreme, came to mind for the roles of Lafayette/Hamilton since the show’s early stages. “Who has the charisma? Who’s a better rapper than Hamilton? Oh, it’s Daveed,” Kail told Charlie Rose. “He has a relationship with the audience, which is chemical. He walks on the stage and they stop looking at anything else but him.”

Diggs so wholly inhabits the roles, that even as an alumna of the Jefferson-founded University of Virginia (where there is a serious Jefferson God complex), I’ve begun to picture Diggs’s face when the founding father comes to mind. “People who love Jefferson are like, ‘Jefferson’s the best in the show.’ And people who hate Jefferson are like, ‘I love how you’re really sticking it to Jefferson out there,’ ” Diggs laughs as we (totally un-coincidentally) approach East Harlem’s Thomas Jefferson Park. “It’s gratifying to me because that’s what we were trying to do—complicate it enough that you couldn’t zero in on hero or villain.”

For Diggs, Jefferson is a less ambiguous figure in real life. “He’s a piece of shit,” Diggs says bluntly, as we stroll by Thomas Jefferson Pool, across the street from the public Thomas Jefferson Houses. “The more I read about him, the more I imagine that his views on slavery were, potentially, more conflicted than we like to give him credit for . . .” He trails off. “He didn’t act on it, so it doesn’t matter.”

Jefferson is blasted for owning slaves in Hamilton, and at the BET Hip-Hop Awards Cypher last year, Diggs brilliantly rapped that, “playing these dead presidents, I’m getting my reparations.” But Jefferson’s romantic relationship with Sally Hemings is also referenced playfully in Hamilton’s cheeky, boogie-woogie anthem, “What’d I Miss?” (“There’s a letter on my desk from the President . . . Sally be a lamb, darlin’, won’tcha open it?”) Stepping out of his rap wheelhouse to sing that song still terrifies Diggs on a nightly basis. “Jefferson’s not afraid of anything,” he says. “Daveed Diggs is a very nervous person.”

I’d never guess that from walking laps with him, old lady–style, in Thomas Jefferson the park. Even in the eye of the Hamilton hurricane, the cockiness of onstage alter egos hasn’t quite rubbed off. “I’m in this moment right now where we get to be choosy and obviously that won’t last forever,” he says. “At some point, I’ll do more McDonald’s commercials if I have to.”

The post Hamilton’s Daveed Diggs on Taking Broadway By the Reins appeared first on Vogue.