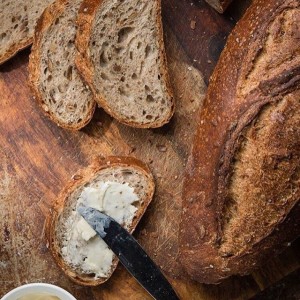 If you’ve been abstaining from carbs or wallowing in gluten-freedom for a while, you might not have noticed that the country is experiencing something of a grain revolution. Chefs and bakers are working directly with farmers to obtain heritage varieties, milling them in-house, and turning much of the recent rhetoric about gluten and carbs on its ear. It’s good news for bread lovers who have sworn off the stuff for health reasons. It turns out that baked goods and cereal sides might not be the enemy after all.

You’ve probably seen spelt at the health food store, but what about emmer, einkorn, and Kamut? These ancient grains are staging a comeback. The emergence of “gluten-free” as a lifestyle choice has helped motivate cooks and researchers to seek answers that dispel popular misconceptions about how gluten behaves both in the kitchen and in our bodies.

“People tell me all the time: ‘I don’t eat bread,’ ” says Adam Leonti of the Brooklyn Bread Lab, which began offering its loaves, pasta, milled-to-order flour, and baking classes late last year. “But this stuff you can eat because it’s completely different. A lot of information [about wheat and gluten] has just come out in the last few years. A major misconception is that gluten makes you feel bad. But we’re finding that it’s what’s been processed out of the wheat—the bran, the germ—that can make it hard to digest.”

The Bread Lab uses rustic wheat varieties like Red Fife, once North America’s favorite variety. Leonti became convinced of the virtues of fresh whole-grain flour after experimenting with it. He found he could eat a whole bowl of pasta that left him feeling “light as a feather.”

“Think about it,” he says. “Bread sustained Europe for so long. And suddenly, it’s making people unhealthy?”

The grains our forefathers ate may well have been better for the body than today’s store-bought wheat products. When the roller mill replaced stone milling in the late 19th century, it allowed for white flour to be mass-produced. But it was soon discovered that the process stripped the flour of essential nutrients. So, a handful of these nutrients were added back in—hence, the “enriched” label on bread in the grocery store. Unfortunately, adding a few vitamins back to the flour doesn’t quite measure up to what nature produces. Researchers now believe this may be why so many people report gluten sensitivity: Key components of the grain that help the body metabolize it are missing.

“We put einkorn on the menu because it’s delicious!” says chef Gabe McMackin of the newly Michelin-starred The Finch in Brooklyn. Einkorn is an ancient variety of wheat, one of the first plants to be cultivated some 10,000 years ago. The taste can be described as nutty and rich but clean. At The Finch, it stays on the menu year-round, served with roasted trumpet royale mushrooms, tatsoi, and a puree of bright, bitter greens in the cooler months and sea scallops, golden chanterelles, and sun gold tomatoes come summer.

“Einkorn does have some gluten in it, so for someone with celiac we’d 100 percent steer clear,” McMackin explains. “But for people with sensitivity to processed, modern, industrial wheat, I’d say it’s safe to enjoy. In general, eating whole heritage grains couldn’t be more different than eating processed, bleached, enriched bread . . . When I eat einkorn, I get energized.”

Emmer & Rye, which opened last fall in Austin, Texas, to much acclaim, has used its namesake grain, a wheat variety almost as old as einkorn, in everything from pasta to cookies. Chef Kevin Fink, a professed “grainhead,” also works with other heritage grains, including purple barley, Blue Beard durum, and White Sonoran wheats. He believes heritage grains provide us with a window into mankind’s relationship to food.

“Way back when, these were the wild grasses we foraged for,” he muses. “Then, we started cultivating them, which led to increased brain development and comfort. We built civilization around farming wheat.”

For Fink, the beauty of these cereals is not unlike that of wine. Industrial mills aim for consistency in their product. But heritage wheat, like grapes or even tomatoes, varies from harvest to harvest. Chefs and bakers must not only learn how to work with it in the kitchen but about its lifecycle in the field as well. Fink points to black winter emmer, which once thrived in Texas. Today, to his dismay, it’s difficult to find anyone who knows how to grow it.

“It’s hard to grow certain heritage varietals,” he says. “They don’t have high yields, or they require special care. In the wine world, you would just charge more for that. In the wheat world, what consumer is going to buy a $12 bag of flour? There are no wheat sommeliers to explain why it’s worth more.”

One of the country’s original grainheads is Chad Robertson, the baker behind Tartine in San Francisco. He introduced his customers to ancient grains like spelt and Kamut (a wheat variety associated with the Fertile Crescent) years ago and has now added Nordic cultivars like øland to the roster. When his latest venture, The Manufactory, opens this summer, it will feature these grains and more, milled in-house for breads, pastas, and pastries, as well as sprouted and cooked grains in porridges and grain salads.

“Like tomatoes or alliums or heritage pigs before it, grain is the current breaking category in this renaissance of discovery and exploration,” says Robertson. “Chefs for so long considered flour just a commodity. When we started to look for more diverse ingredients, we inevitably zeroed in on grains. Now we see that the diversity is virtually infinite, opening up a world of flavors to us.”

Flavor is key, says Bob Klein, a Bay Area restaurateur who started Community Grains in 2007 when he got frustrated with the quality of flour available to chefs. Once he began sourcing grain directly from farmers, he felt everyone should have access to it. Since 2010, the company has sold fresh-milled hard red winter and hard amber durum wheat flours and pastas online. Klein believes their flavor is directly linked to the nutrient richness of the farmers’ soil.

“Wheat went brain-dead 100 years ago,” he says. “When it become part of a commodity system, the farming knowledge went away. If you talk to someone’s old Russian grandmother about it, she’ll remember that wheat once had character. Farming in nutrient-rich soil is bringing that back.”

Most importantly, he says, his flour is milled in a way that doesn’t remove any part of the grain. The bran, germ, and endosperm are kept intact: “nothing added, nothing taken away.”

The post Gluten-Free? These Heritage Grains Will Lure You Back appeared first on Vogue.