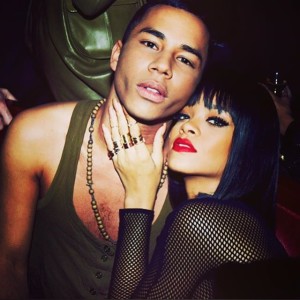 If you were to ask the mirror, “Who has the fairest cheekbones of them all?” Would the superlative go to the impeccably sculpted David, which took Michelangelo more than two years to create? Or perhaps, to the breathtaking image of Aphrodite, bare-bosomed and standing on the shell? Maybe they are retained on the masterpiece bust of Nefertiti, held in a museum for onlookers to bask in her angular beauty? No, no, and no. The most stunning, slivered, and hallowed cheekbones of them all belong to none other than the Kardashian-flanked Prince of the Selfie, Balmain creative director Olivier Rousteing.

And Rousteing’s cheekbones are nothing less than godlike. Even when the designer’s enviable, dagger-sharp zygomatics are filtered through Instagram, they are still marvelous and perfectly defined with a slicing shadow. So how does one make Rousteing’s Maleficent-worthy cheeks come to life for themselves (and how to rack up the plethora of double taps for their next selfie)? According to Tom Pecheux, makeup artist of choice for Balmain’s backstage, the trick of the cheekbone trade comes down to one thing: contouring. But not so fast: It’s not just a simple streak here and a blend there; it’s all about positioning. “You have to put the contour lower on the face than you think,” said Pecheux. By “lower,” he means not high under the cheekbones, but rather just above the mouth and under the cheekbones. The second tip? Sucking in. “When the girls are complaining about baby fat or a round face, we have them suck in their cheeks a little bit,” said Pecheux, “and where it hollows out is where we put the contour.”

Though a puckered selfie with the glistening KKW may be slightly out of reach, the products to get Rousteing’s eternally etched visage are accessible. “A taupe powder from MAC, or, if you want something easier because you’re new at it,” said Pecheux, “you could do Tom Ford’s cream version, which is really great.” But the most important thing to remember? “The key thing is to have a light hand.” Easy enough. Now, make like the royal Rousteing, contour to your heart’s desire, and snap away like the Balmain-blessed demigod you truly are.

Olivier Rousteing and Justin Bieber at the 2015 Met Gala:

The post Getting Olivier Rousteing–Worthy Cheekbones Is Easier Than You Think appeared first on Vogue.