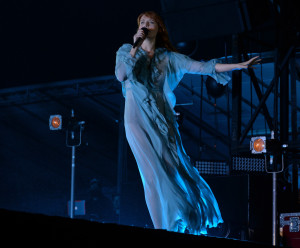 Upon the announcement of Florence Welch as the face of Gucci’s timepiece and jewelry collection last month, the singer dubbed creative director Alessandro Michele her style “kindred spirit.” New evidence of the strong bond between the two fashion bohemians was on full display at last night’s Lollapalooza Brasil concert, where Welch stepped on stage in a diaphanous blue floor-length dress designed by Michele for the brand. The ethereal floor-length confection practically dusted up a cloud around Welch as she sang in front of an enraptured audience.

It’s one of the performance pieces created especially for Welch’s How Beautiful tour, the latest in a long line of Gucci looks the singer has worn with her signature whimsy. She drummed up plenty of magic in the celestial pink star-and-moon embroidered ruffled-hem gown at this year’s Grammys and in the fur cape she wore to the Brit Awards. Here, we take a look back at Welch’s supernatural style in Gucci’s most enchanting designs.

The post Florence Welch Enchants in Custom Gucci at Her Brazil Concert appeared first on Vogue.