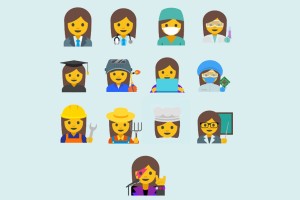 It seems like Jane Fonda might finally get her wish for more feminist emoji. On Tuesday, Google introduced a proposal to Unicode Consortium, the emoji gatekeeper, asking it to consider adding 13 new female career-driven options. Unicode’s current offering includes women with limited and nebulous career ambitions, including a bride, a salsa dancer, and bunny-eared twins.

In its proposal, Google quoted Amy Butcher’s recent New York Times op-ed piece, which lamented the lack of representation of strong female characters on the emoji keyboard. “Where was the lawyer? The accountant? The surgeon?” wrote Butcher. “How was there space for both a bento box and a single fried coconut shrimp, and yet women were restricted to a smattering of tired, beauty-centric roles?”

The proposed emoji adds include a doctor, a software engineer, a chef, a teacher, and our personal favorite, a Ziggy Stardust–inspired rock star—well played, Google. “We believe this will empower young women (the heaviest emoji users) and better reflect the pivotal roles women play in the world,” read the proposal. According to a poll by Adweek, 78 percent of frequent emoji users are women. Your move, Unicode.