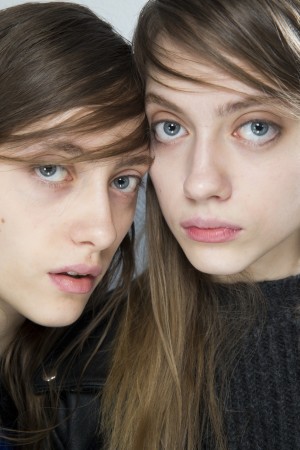 You’d be forgiven for thinking you were seeing double during this past fashion month, but those serene faces strutting their stuff down so very many runways were none other than Russian twins Lia and Odette Pavlova. The pair was front and center at seemingly every single show this season, often (but not always) side by side, meaning that the sisters didn’t just walk fashion month, they conquered it, emerging as the top two walkers of the whole shebang. Lia worked an astonishing 71 shows, while Odette was featured in 62. And these aren’t just any shows either—both girls showed up at the best of the best, including Alexander Wang, Givenchy, and Valentino. Model sisters may be an increasingly common occurrence, but this marks the first time twins have managed to pull off such a feat—a fact that isn’t lost on the Pavlovas. “It’s awesome,” said Odette via email, post–Paris Fashion Week. “I’m very happy to realize that my sister and I walked the first- and second-highest number of shows this season.”

The twins hail from the westernmost reaches of Russia, in the city of Pskov, and got their start last year via a series of key exclusives. Lia opened Alessandro Michele’s debut Gucci show and has been working with the designer ever since, while Odette emerged during Couture to walk for Schiaparelli before snagging a Saint Laurent exclusive for Hedi Slimane’s Fall ’15 show. Now signed to One Management and Next in New York, respectively, it’s fair to say that the duo has been working overtime. Thanking the casting directors, designers, and stylists who supported them along the way, both Pavlovas are grateful for the opportunities the season has provided them with. “It’s a really great feeling; when I started this fashion month, I couldn’t even imagine that I would have such a successful season,” said Lia. “I’m very happy that my sister is doing so well, too.” For Odette, the casting coup served as the culmination of the work they’d put in for months prior: “We tried very hard to do the job 100 percent, and it’s pleasant to know that all is not in vain! I love my job; I love everything I do, and maybe that’s why I was able to make a good season—I’m very glad.” With campaigns, editorials, and a host of high-profile work on the horizon, you can be sure you’ll be seeing this photogenic sister act in even more places very soon.

Watch all of our Fall 2016 Ready-to-Wear videos: