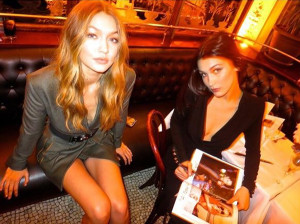 You know what they say: Family first! And in honor of National Siblings Day, what better time to take a hard look at some of fashion’s favorite model-strutting siblings. Among the by-blood catwalkers are no less stars than sisters Kate and Lottie Moss (for whom it’s all in the genes—or rather, the Calvin Klein Jeans); social media heavy hitters like Bella and Gigi Hadid, whose combined Instagram followers are almost 20 million; and Vogue regulars Lily and Ruby Aldridge. Cara and Poppy Delevingne are both staples at the Burberry runway shows and beyond, just like Adwoa and Kesewa Aboah. Another up-and-coming pair? The brother-sister pairing of Lou and Nils Schoof.

But wait, there’s more: and they’re twins! There are the Bell sisters, who can be differentiated by their hair (or in Ruth’s case, the lack thereof), Elizabeth and Tyg Davison, Baylee and Kelsey Soles, and the Russian runway rulers Odette and Lia Pavlova.

But good things don’t just come in pairs—now they’re coming in dynasties. Like their father, David Beckham, brothers Romeo and Brooklyn have also had their time in front of the camera—and we wouldn’t be surprised if David and Victoria Beckham’s youngest son, Cruz, soon follows suit. And of course, there are the Smiths, who have a family band (The Atomics) and skyrocketing model careers for industry darling Lucky Blue and his sisters, Pyper America, Starlie Cheyenne, and Daisy Clementine. After all, the family who poses together, stays together.