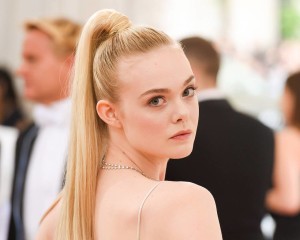 When Elle Fanning appeared on the 2016 Met Gala red carpet with a sleek power ponytail and décolleté dusted with shimmer, her simple yet modern look struck us as one of the most charming takes on the night’s futuristic theme. “It’s young; we kind of scraped it back,” Fanning said, of her sky-high hairstyle, which flattered her champagne Thakoon gown. “The makeup is a bit more futuristic,” Thakoon Panichgul added, pointing to the silver shadow at the inner corners. “She’s got a sci-fi movie coming out.”

Looking at the diamanté clutch in Fanning’s hand, we wondered whether the makeup essentials packed within were equally sci-fi. Unclasping the hinge, the 18-year-old revealed a surprisingly pared-back kit: Two pieces of Orbitz gum, a $50 bill, an Amazing Cosmetics Amazing Concealer from Sephora—”It’s super-fair because I’m so white”—a basic black eyeliner, and her iPhone. “And that’s it! That’s all I can fit,” she said, laughing. What more do you need?