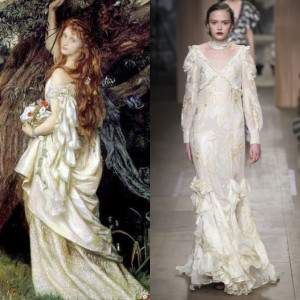 In the 400 years since William Shakespeare’s death on April 23, 1616, the great British writer’s comedies, tragedies, and dramaties have been performed on countless stages around the world, studied by pretty much anyone who has passed high school, and filmed a few—dozen!—times. Who could forget Franco Zeffirelli’s 1967 lavish fashion-feast-for-the-eyes adaptation of The Taming of the Shrew or Baz Luhrmann’s 1996 modern blockbuster-hit take on Romeo and Juliet? And the roster of feverish cult classics goes on. So the point is this: If you’re going to put Shakespeare back on the stage, the silver screen, or the runway, it has to feel new and relevant.

Replete with timeless tropes from ruffled collars and draping dresses of head-to-toe brocades to the highest of necklines and puffiest of sleeves, the rhetoric of the Fall runways was nothing short of an eternal ode to Shakespeare himself. And so, with much ado about all things pretty and pastoral, we’ve handpicked five of Shakespeare’s leading ladies—Viola (Twelfth Night), Titania (A Midsummer Night’s Dream), Ophelia (Hamlet), Rosalind (As You Like It), and Lady Macbeth (Macbeth)—and the fresh-off-the-runway interpretations of what they might wear today.

The post Dress Like a Shakespeare Heroine! What the Bard’s Leading Ladies Would Wear From the Fall Runways appeared first on Vogue.