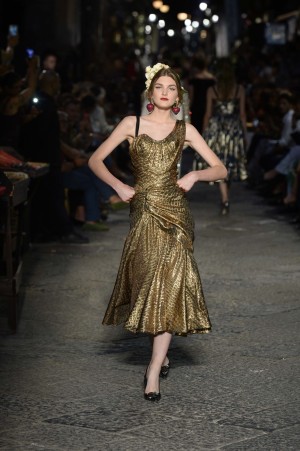 The enthronement of Sophia Loren took place in a street in the Quartieri Spagnoli, right in the middle of old Naples tonight. Effectively, that’s what Dolce & Gabbana arranged for Italy’s great movie diva of divas, a ceremony which backgrounded its Alta Moda collection, both literally and symbolically. “This is my place, my land. Sometimes, it is not just about the clothes,” declared Domenico Dolce, backstage before the show (if you can call the cloisters of a baroque church “backstage”). “It is inspired by Sophia, by Naples, and tradition. She grew up not far from here, and many of her movies were set here. There’s one she was in called Miseria e Nobiltà,” he continued. “Naples is still like this today, very poor on one hand, but with this incredible Baroque architecture, the Spanish influence on the other. There are all these specialist craftspeople in the little shops here, family businesses, each making something differently. This is what Stefano and I relate to. It is authentic.”

Amongst the rails hung with richly embroidered, painted, needle-pointed, and gilded clothes swung a corseted swimsuit with a white satin sash, the words Miss Eleganza sewn in gold beads. It was a reminder that Sophia Loren’s first step to fame was competing in a local beauty contest, the break that took a girl from impoverished postwar circumstances to becoming the first Italian performer to win an acting Oscar. Now 81 years old, sparkling in rose-patterned sequins, and still in charge of an impressive plunging décolletage, Miss Loren made her way to be seated on a gilded velvet throne on a grandstand built on one of Naples’s oldest thoroughfares. Above, Neapolitan families of many generations, babies to grannies, hung from apartment windows and lined every available rooftop to cheer, applaud, and call her name. A local brass band of mostly senior signori marched by in boisterous salute, and then the girls, 99 of them, finally started to pick their way down the cobbled street.

Dolce & Gabbana really do go to town with their Alta Moda. The guests were the international superrich, who clearly love to buy their elaborately decorated, feminine clothes, but it was almost certainly the locals who had a better insight into all the homages to La Loren’s movie costumes and references to high Catholicism, folk art, and food. Each look was garlanded with extraordinary collaged headresses involving flowers; satin bows; hearts; and at one point, a cake. There were balconette necklines and curvy pencil skirts; sexy dresses with swishing hems reminiscent of Loren’s “poor-girl” ’40s roles; and incredibly fitted black suits and coats made for going to mass, but worn over sensual satin slips.

The designers allowed themselves more passages of humor, surreal exaggeration, and irony than usual—something to do with immersing themselves in the heady southern Italian mix of religion and street life. A gold brocade bejeweled cape, like something from a religious festival, was topped with a towering bishop’s mitre, and one girl teetered along in her glittery heels with what looked like an entire shrine on her head. Then turned up a pouffy blue skirt circled with an entire washing line hung with appliquéd stockings and lingerie; and, bringing cheers from the balconies, a girl in a satin soccer shirt with Sophia on the front and Maradona 10 on the back.

High, low, and huge fun it was, classic Dolce & Gabbana, with a nod to the currently rising shoulder line, a “pizza”-tablecloth puffed-sleeve blouse here; a richly gilded bolero jacket there; flashes of the ’80s, back again. Which, come to think of it, brings Domenico Dolce and Stefano Gabbana almost full circle to when they started. Somewhere in the crowd was the model Marpessa Hennink, who starred in an early advertising campaign the designers shot with her in the Naples street market. They were penniless then, but already enamored with the idea of saying something about their country. And look at them now.