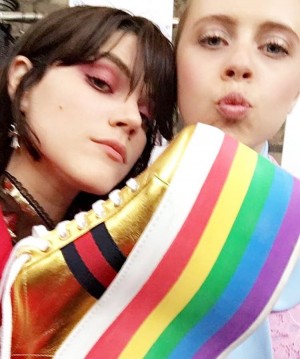 Gucci said “cheers!” to London today when it presented its 2017 Resort collection in Westminster Abbey, a storied and formal setting for a collection that was full of fun and colorful homages to the “sceptered isle.” Creative director Alessandro Michele indulged in a bit of Anglomania, incorporating motifs like roses, Staffordshire dogs, plaid, and Union Jacks in a collection that was signature Gucci.

The British flag wasn’t the only one that Michele appeared to reference in his Resort collection: Models glided down the aisles in laced club-kid platforms that featured not only the brand’s classic red and green stripes, but rainbow ones similar to those used on the gay pride flag, save for the missing orange stripe, designed in San Francisco in 1978 by artist Gilbert Baker.

The silhouette of these shoes recalls the platformed creepers favored by ’90s night crawlers, and is another homage to the United Kingdom, whose club culture has left an indelible mark on fashion, giving us punks, the New Romantics, and ravers. Gucci’s new high-stepping footwear—a departure for Michele, who generally favors lady- and granny-like shapes—makes more than a fashion statement, though. The designer seemed to be taking a stand in support of all kinds of amore in a country where same-sex marriage has been legal since 2013. Michele also tapped the openly bisexual actress Soko to take over Gucci’s Snapchat account, and models wore garments tagged “Blind for Love.” As usual, his timing was spot-on: June is LGBT Pride Month. As these have-to-have rainbow creepers won’t be in stores until much later this year, Vogue.com’s Assistant Market Editor Anny Choi has gathered some cheerful alternatives to buy now while we await their arrival.