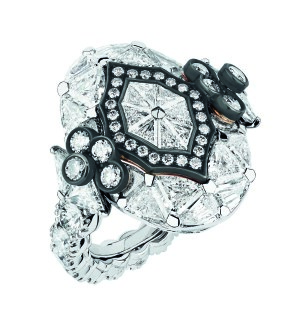 Imagine for a moment that you might be able to pluck a drop from a chandelier at the Chateau de Versailles and transpose it into an earring, ring, or a necklace. Then imagine that you could travel 250 years or so back in time and see a jewel as it might appear dancing in candlelight. Getting the past to speak in the present tense is the feat that jewelry designer Victoire de Castellane has pulled off for her latest collection of high jewelry at Dior.

“If there’s a single image of Versailles that dominates for me, it’s the idea of jewelry illuminated by candlelight. That kind of light is just marvelous, but I wanted to illustrate it through the prism of memory and not interpret it literally,” the designer said in an exclusive interview earlier today. To achieve that effect, de Castellane picked up on 18th-century jewelry making techniques, setting clusters of diamonds against darkened silver, rose gold, white gold, and platinum, infusing them with the same aura of mystery as in the chateau’s famed Hall of Mirrors. Diamonds seem suspended in midair. Major stones appeared to be mounted in heirloom settings, except that on closer examination the settings are too disruptive to be completely at home in a portrait at the Louvre. On the imposing Galerie des Glaces necklace, the collection’s most important piece, the stones look like they were composed almost randomly. Ditto for a series of brooches, a first in the maison’s high jewelry repertoire. “In my head, I know exactly what I want in a piece of jewelry: It begins with a story, and I know what kind of stones go with it,” said de Castellane.

Further along, other highlights include the Chambre du Roi (King’s Bedroom) necklace anchored by an important sapphire, and the Salon de Mercure bracelet in platinum, pink gold, darkened silver, diamonds, and ruby. “That was a challenge for the atelier, because they know I like it when the metal disappears and the ribbon conveys movement, plus it has to stay light,” de Castellane noted. “These pieces prove that we’re working with the best ateliers in the world.”