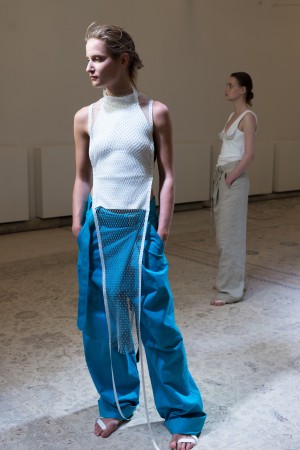 Of all the places to stage a fashion show, a sweltering hot yoga studio is probably not high on many designers’ lists. The rationale for the sticky situation at Christopher Esber’s presentation was his inspiration: the diversity of desert landscapes, a theme he aimed to translate not only in his widely varied and textural collection, but also in the environment it was presented. The former attempt was far more successful than the latter.

So let’s talk about the clothes. Esber is a smart tailor, which was a main factor in making his collection of linen, knits, denim, and velvet feel coherent. Cutaway knits and bib tops offered slight sensual touches, while net tanks studded with Swarovski crystals that hung long to the floor were a savvy new take on the dishabille spirit that runs through Australian fashion. Some pieces, like an empire-waist dress, veered a little toward the unflattering, but Esber made up for it with a real stunner of a black crepe number with a white placket and loose ruffles on the sleeves. A flared hip blazer in black was another chic piece that could find a home on a woman with international sensibilities. Next season, Esber should considering bringing more looks like these to the fore. 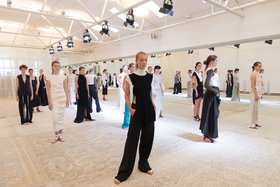