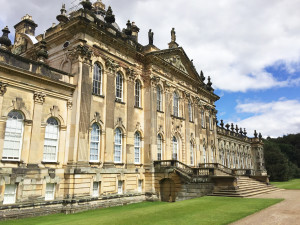 As a little boy, I used to set the itineraries for my holiday trips around England with my father in the VW camper van. These routes were invariably predicated on the costume museums that were dotted around the country in various towns, cities, and storied stately homes. The Fashion Museum in Bath was a great lure, but another dream destination was Castle Howard in Yorkshire, where fashions through the ages (and some marvelous costumes designed by the artists who worked with Diaghilev and his Ballets Russes) were arranged in an elegant Palladian stable court designed by the great 18th-century architect John Carr of York (whose Crescent in the Derbyshire spa town of Buxton I recently made a pilgrimage to see). Dad still has flickering hand-held Super 8 footage of me pretending to be a missing statue on a buttress of Vanbrugh’s Temple of the Four Winds.

A decade later, when I was just embarking on my studies at Saint Martin’s School of Art, we were enslaved to the television every Tuesday night to watch Granada Television’s magisterial adaptation of Evelyn Waugh’s Brideshead Revisited, a novel of doomed Bright Young Things and spiritual redemption. The director, Charles Sturridge, who managed to cast many of the greatest actors of the period (Sir Laurence Olivier as Lord Marchmain, Sir John Gielgud as Mr. Edward Ryder, and a young Jeremy Irons as his son, in thrall to Anthony Andrews’s glamorous, spoiled, and irresistible Lord Sebastian Flyte), chose Castle Howard as the setting to represent Brideshead. Ever since, the house and its fabled grounds have been associated in the popular imagination with Waugh’s book. Even Julian Jarrold’s woefully inferior 2008 movie adaptation was (rather unimaginatively) also set there.

So when, forty years later, I was invited to come and stay for the weekend with Castle Howard’s very new chatelaines, Nicholas Howard and his wife Victoria Barnsley (who founded the distinguished publishing house Fourth Estate), my cup not only ran over, it positively spilled over the table, down its legs, across the marble floor, down the Palladian steps, and into one of the greatest landscapes engineered by God and man that England can offer.

As a little boy I was suitably dazzled by the house and its estates, but made a beeline for the stables with their arrangements of mid-18th-century sack-back gowns in one area and 1930s Lanvin dresses in another. Alas, the costume court is no more, but now that I have been able to renew my focus on the house and its setting, I realized how brilliantly they are calculated to steal the breath away at every turn.

The architectural ensemble was conceived by the protean John Vanbrugh—a gentleman playwright and member of the rakish Kit-cat Club—for the third Earl of Carlisle. Incredibly enough, the castle was Vanbrugh’s first architectural project, so he brought the more practiced Sir Nicholas Hawksmoor on board to help him realize his operatic Italianate vision. They convincingly transformed a monumentally scaled building on a hill in blustery Yorkshire into a simulacrum of a palace in the Veneto. Work began in 1699 and was not finished by Vanbrugh’s death in 1726, or indeed that of the third Earl’s more than a decade later. The fourth Earl commissioned the less inspired Sir Thomas Robinson to finish his father’s house. Reflecting changing tastes, Robinson abandoned Vanbrugh’s master plan and instead created a Neo-Classical wing that does not relate aesthetically to the baroque original and gives the house its odd and quirky asymmetry.

Vanbrugh and Hawksmoor also designed a series of entrance buildings (one crowned with a pyramid), which enclose archways along the endless drive—arriving at the house is like alighting upon a gala. A further composition of buildings within the grounds creates a landscape out of Poussin—the aforementioned Temple of the Four Winds, a  mausoleum, a Palladian bridge, eye-catchers galore, and even a pyramid of pale stone. The latter is now gleamingly restored and seems to float above a rolling field of golden wheat. The effect is powerfully beautiful. There were further concessions to changing to tastes when the eighth Earl’s younger brother transformed the chapel in the 1870s, commissioning William Morris’s company to effect an Arts and Crafts makeover, complete with Burne-Jones stained glass windows. It is a triumph of Aesthetic Movement style.

The weather was miraculous, with forget-me-not blue skies skittered with lamblike clouds, and a golden sunset that set off the views of Vanburgh’s entrance buildings etched into a sitting-room windowpane by the glass artist Laurence Whistler—a dream of Albion. Incidentally, Whistler’s brother Rex was a Bright Young Thing and a leading Neo-Romantic artist in the 1920s and ’30s, before he was killed tragically young on his first day of action in the Second World War. (I couldn’t like his work more—if you want to surround yourself with it, go to the Rex Whistler Restaurant at London’s Tate Britain, which houses his murals representing The Expedition in Pursuit of Rare Meats. It’s one of the most enchanting rooms in London.) A generation ago, the whimsical New Zealand–born artist Felix Kelly, a successor of sorts to the school of Whistler, created a series of painted capriccios for Castle Howard, and a playful Festival of Britain-style charabanc that transports visitors around the grounds.

Waugh titled the first book of his Brideshead opus, “Et in Arcadia Ego” (I too was in Arcadia). After a weekend at Castle Howard, it was my mantra too.

The post Castle-Crashing in England with Vogue’s Hamish Bowles appeared first on Vogue.