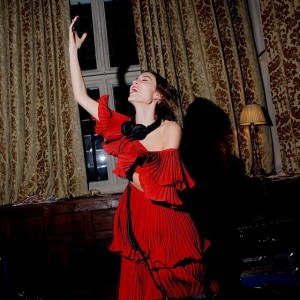 The idea of a fashion taboo seems quaint in this age of informality and individualism. White after Labor Day? Been there, done that. Jeans every day, every way, everywhere? Ditto. You get the idea. Yet there still is a subject that arouses passion and discord even among the fashion cognoscenti: Is wearing white—or black or red—inappropriate if you’re a guest at a wedding?

Now, wedding dresses weren’t always white, and in some cultures they still are not. It was Queen Victoria, who married Prince Albert in 1840, who set the trend for brides. Not only were royal weddings much copied then, as they are now, but the Queen’s choice was more than fashionable, it was symbolic: White is a color associated with purity and innocence, qualities particularly admired in the tightly-laced Victorian era.

Over time, white became off-limits to guests, and the wearing of funereal black, and fiery, passionate red also discouraged. But does that rule still hold? Should it? Vogue staffers are passionate and divided on the subject. No gray area here. “Blasphemous!” responds Vogue’s features associate Elizabeth Inglese. “Even if the bride is cool with your outfit, half the guests in attendance will look you up and down and wonder what went wrong in your childhood that you feel compelled to commit such a conspicuous and avoidable faux pas.” Somewhat less circumspect is Executive Fashion Editor Jorden Bickham, who wore a black tux to her sister’s wedding). “It all depends on your audience,” says Bickham, “some brides prefer white or shades for their bridesmaids.” (That would be me! The bridesmaids wore ivory.)  On the other end of the spectrum is Contributing Editor Michelle Ruiz Andrews, who rejects the implication “that others wearing white will detract or distract from the bride.” Her reasoning: “If the bride is bringing it, that should be truly impossible!”

A level-headed approach to the conundrum is offered by Fashion News Editor Alessandra Codinha, who says “ASK!!!,” but warns that even if the bride is fine with it “I promise she has a mother, mother-in-law, or nosy aunt who will make a comment and make you feel crummy.”  Felling intrepid? The secret to playing up color, suggests Assistant Market Editor Anny Choi, is to avoid formality with a festive, but summery laid-back vibe.

Above, her twelve rules—and many more shop-able suggestions—for wearing red, black, and yes, white, to a summer wedding.

The post Can You Wear Black, Red (Or Even White!) to a Summer Wedding? appeared first on Vogue.