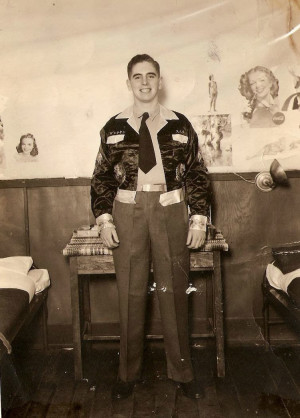 That embroidered satin jacket that you want so badly this spring, the one that tantalized on the Chloé runway and showed up everywhere from Louis Vuitton to Saint Laurent, the one you have been craving at Gucci but settling for from Zara, has a surprisingly fraught history.

Unlike most trends that seem to arise from fashion’s primordial muck and do not have one specific point of origin, these jackets can purportedly be traced to a single person—an imaginative American serviceman stationed in occupied Yokosuka, Japan, immediately after World War II. This soldier had the bright idea to take his regulation bomber jacket to the local tailor and have it embroidered, thereby turning a symbol of war into a placid souvenir. (As the story goes, he brought it to Tailor Toyo, still in business in Japan.) When his fellow servicemen got a look at this unique fashion item, they decided they wanted to have a little something to take home as well and brought their own jackets in for decorating. How strange it must have been for the local Japanese population to embroider the occupying army’s clothes with the stereotyped symbols of their two nations—geishas and eagles, cherry blossoms and dragons, and even, at the GIs’ request, maps of military campaigns. (The jackets were almost always reversible, in case you wandered into a location where wearing your military conquests on your back might be less than appreciated.)

Soon demand outstripped supply, and Japanese tailors began creating jackets from leftover parachute silk and other fabrics. They were—and still are—named Sukajan, which some fashion etymologists believe means “Sky Dragon Jumper” in Japanese, but others think is an amalgam of “Yokosuka” and Japanese-accented “Jumper.” In the 1960s, Japanese gangs sported these Sukajan, an act of rebellion that, when you think about it, might well have horrified their parents.

The strange power of these garments, the way they encapsulate the power imbalance between the victor and the vanquished, is perhaps what gives them their extra transgressive kick. But, of course, they are so pretty, too! Well, at least most of them are. Twenty years after the occupation of Japan, young soldiers in another military arena likewise wanted souvenirs. But instead of cherry blossoms and cheery good-time girls, their jackets often featured maps of Vietnam and the legend: “When I Die I’m Going to Heaven Because I’ve Served My Time in Hell.”

The post But What’s the Real Story Behind That Gucci Satin Bomber? Tracing Its Embroidered Roots appeared first on Vogue.