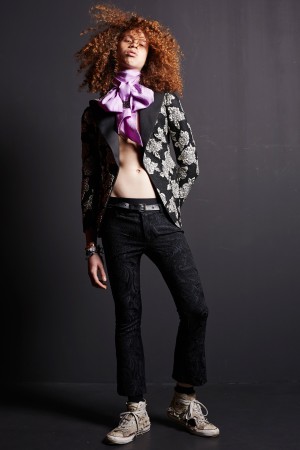 There’s no arguing with the royal purple legacy of Prince Rodgers Nelson. The Minnesotan musician crafted some of the most unforgettable ensembles on and off the stage, challenging traditional notions of gender with his fearless sense of personal style. Perhaps the most iconic look in his repertoire is the slightly peaked shoulder jacket, ruffled blouse, and stacked heel boots of Purple Rain, though much like his prolific musical talents, his flair for fashion was seemingly boundless.

Throughout his career he could be seen writhing onstage shirtless in fringe pants or shredding on his guitar, hips thrusting, in a metallic brocade suit. He dispensed with clothing altogether on his Lovesexy album cover, and the backless yellow jumpsuit he wore to the 1991 VMAs was enough to inspire a generation of risk-takers on the red carpet. Never in my life have I seen an arena full of people so transfixed by the simple flip of a black-and-white cape, as when Prince unexpectedly took the stage during the opening set of his Welcome 2tour performance in New Jersey’s Izod Center in 2010. Even from the nosebleeds, his commanding stage presence was the kind of thing that gives a girl chills. With his Neo-Edwardian suits, passimenterie jackets, draped velvet tops, and oversize silk blouses, Prince was as legendary as style icons come.

Of course, super fans of the Purple One are many in fashion, and his influence can be felt all over the runways right now. Prince’s penchant for a boldly tailored suit is echoed at Dolce & Gabbana and Haider Ackermann, while the richly embellished handwork at Gucci and Roberto Cavalli picks up the thread of his love for opulent glamour. At Balmain, Olivier Rousteing has been known to transform supermodels such as Joan Smalls and Gigi Hadid in the image of Apollonia, Prince’s statuesque protégée. And before Rousteing there was Christophe Decarnin, whose Fall 2010 collection for Balmain captured his spirited style best.

Today, the likes of Donatella Versace, Marc Jacobs, Riccardo Tisci and more have marked his passing on social media, remembering the singularity of Prince’s vision in their own ways. Yes, we’ll be in mourning for the Prince for some time, but his star is bound to shine on. In Decarnin’s Fall 2016 collection for Faith Connexion is a brocade jacket styled with a lilac Edwardian collar worn by model George Hard, a waifish gent with a flame red Afro and gender-bending pout. Can you picture this?

The post Beyond the Purple: Prince’s Influence on the Fashion World appeared first on Vogue.