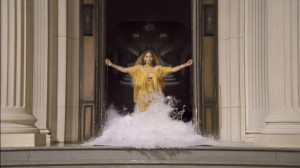 As we all know Beyoncé is an incomparable shape-shifter, an entertainer who, over the course of her career, has moved from one persona to the next through the transformative power of costumes. From her signature leotard-clad Sasha Fierce look to the turn-of-the-century Southern belle styles she wears in the video for “Formation,” clothes are a conduit for her provocative messages and allow her to fully embody a range of characters.

And with the premiere of her just-released visual album Lemonade tonight the performer is in rare form. Throughout the hour-long feature that debuted on HBO, we find Beyoncé picking up the role of a host of new and wildly stylish women who trace her matrilineal roots from New Orleans to Texas.

Mitigating the woes of a broken family, heartbreak, and perhaps even marital issues of her own, Beyoncé’s identity is fractured. As a woman scorned, the buxom beauty slips into a canary yellow ruffled gown and wields a baseball bat as she tears through a car-lined street. Smashing windows of vintage El Dorados as passersby look on with awe, she recalls a modern-day Carmen Jones, finding joy in wreaking havoc.

She later sings the tale of a shrewd harlot who “cries Monday through Friday” and works the pole “Friday through Sunday,” looking every bit the part in a white high-neck lace frilled bodysuit. Bey cuts an equally smoldering figure stalking the pavement of a deserted parking lot dressed in a Hood By Air floor-length fur coat, Yeezy crop top, and matching leggings, a sankofa necklace bouncing off her chest as she bemoans her cheating lover. Rapping over Jack White’s throttling drums, she has style and attitude in spades.

As a Voodoo high priestess surrounded by a circle of fire however, Beyoncé appears steely and chic in a corseted gown that is literally red-hot; even her gilded headpiece reflects flames as if she’s channeling spirits who are not yet visible. In that same breath, she switches up her look again with a cone-shaped bra and an ornate and towering headdress, what is clearly Bey’s homage to the ethereal Egyptian queen Nefertiti. And as the movie closes, we see her emerge from the shadows dressed in a slinky silver slip and conjuring the spirit of yet another mythical creature: the beguiling siren.

However you choose to interpret the complex siren song of Beyoncé’s Lemonade, her ever-evolving style is more alluring and surreal than ever before.

The post Beyoncé’s Fashion Transformations in Lemonade Are More Surreal Than Ever Before appeared first on Vogue.