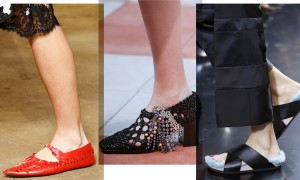 Phoebe Philo’s Céline entered the world feet first. Before there was the luggage bag, the ads with Daria Werbowy, or even a single Philo-designed garment, there was the Céline shoe. How do I know? Because when Vogue sent reporter Vicki Woods to Philo’s for a studio interview months before her first Céline collection was shown in 2009, her gaze was immediately drawn downward. “The first thing I want is the shoes off her feet. The vintage-y strappy fronts are in face-powder pink soft leather, the back is jacked up on a towering stilt in red and black, and there’s a slick of metal in there, too. These are Céline shoes. This is the first time I have ever looked at a Céline shoe and felt a lust to purchase. I tell her the colors are great, the heel is great, the proportions are great, with that rounded front,” Woods wrote in Vogue’s October 2009 issue. “Phoebe Philo smiles. ‘Yes. I like a short last.’ ”

Short lasts considered, Philo’s shoes have had quite the long-lasting impact on fashion. Her first runway pair for Spring 2010 were wood-soled platforms with caramel leather uppers, lifting models 5 inches higher as they paraded to and fro on Philo’s stone runway. At the time, Vogue’s Sarah Mower credited the shoes with some of the collection’s success, referencing “the genius of the wedge sandal that made every single look work.” Those buff-toned stompers were the canvas on which Philo would build an empire of the chic and the strange. Heels would continue to dominate for seasons, from the much-copied white geometric styles of Fall 2012 to the thigh-skimming second-skin boots of Fall 2013. In between came the furkenstock.

The Spring 2013 sandals caused a stir in the press. Miley Cyrus wore them, as did Tilda Swinton. Their pastel pink and baby blue fluffy insteps became an instant hit, perhaps distracting from Philo’s other creations that season: a nude pump with trompe l’oeil toes and several entirely fur options in cherry red and Big Bird yellow. Things got more exciting from there: the ball-heeled mules and slip-on sneakers with “love” and “life” emblazoned on tabs at the heel for Spring 2014; the scrunched-front glove shoes of Spring 2015; the white lug-soled Chelsea boots of Spring 2016. Weirdest of all might be the babouches of this year’s Resort collection, über-flat and buckled, like something a punk monk would wear under his robes.

While we can’t say what we’ll find on Philo’s Fall 2016 runway tomorrow, we can look back at her past hits. C’mon, don’t you just need them?

The post An Appreciation of Phoebe Philo’s Sexy and Strange Shoes at Céline appeared first on Vogue.